Susan Quinn talks  about her acclaimed book, Eleanor and Hick. It’s about the romance between Eleanor Roosevelt and journalist Leonora Hick.

Then, on May 31 as this show was being produced, it was announced that Donald Trump is likely to pull out of the Paris Climate Agreement. We re-air our interview with Naomi Oreskes about the novel she co-wrote with Erik Conway, The Collapse of Western Civilization: A View from the Future. It’s a speculative look at what inaction on the climate has done to our world, looking back from the year 2393.

And be sure to check out our Web Only interview with Inside Climate News Reporter Marianne Lavelle about the implications of pulling out of the Paris Climate Accord and another blockbuster announcement May 31: the vote by Exxon shareholders to compel the company to report the impact of climate change on its bottom line. 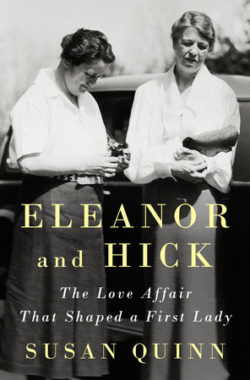 Eleanor Roosevelt was one of the towering figures of the twentieth century. She was the only First Lady who was also a political force, diplomat and activist in her own right and moreover, one who always championed the rights of the downtrodden.

But she had a secret: her love affair with journalist Leonora Hick. The two women could not have come from more disparate backgrounds, yet they shared a common history of childhood pain.

And they shared much more than that. They were partners in revealing the desperate conditions of so many Americans during the Depression. The results of their fact-finding tours during FDR’s first administration had a great impact on his New Deal policies.

Susan Quinn tells this story wonderfully in her book Eleanor and Hick: The Love Affair That Shaped A First Lady. It’s been listed among the 5 best biographies of Eleanor Roosevelt.

Quinn is the author of Furious Improvisation: How the WPA and a Cast of Thousands Made High Art Out of Desperate Times and Marie Curie: A Life, among other books. Her work has appeared in The New York Times Magazine, the Atlantic, and other publications. Eleanor and Hick is out from Penguin Random House.

As this episode of WV was being produced, the news broke that Trump will most likely decide to pull the US out of the historic Paris Climate agreement. [We will update this post when the decision is announced.]

Let’s not mince words here. We are in a climate emergency. The Paris Agreement didn’t go far enough, but it was a start. Trump’s move to pull out would be full speed ahead in the wrong direction.

What Could Disappear With Climate Change

With that in mind, let’s listen back to our 2014 interview with Naomi Oreskes about the book she co-authored with Erik Conway, The Collapse of Western Civilization: A View From The Future.

It’s a science-based speculative novel about the consequences of our current inaction. WV interviewed her just before the historic People’s Climate March that took place in NYC and around the world in September, 2014.