When it comes to fracked fossil fuels, are we being sold a bunch of snake oil? Energy analyst Richard Heinberg talks about his riveting new book, SNAKE OIL: How Fracking’s False Promise of Plenty Imperils Our Future. And journalist Bill McKibben helped spark the global mass movement to save the climate. McKibben tells the story of how that movement developed — and a parallel story of his neighbor in rural Vermont who just happens to be a foremost beekeeper. McKibben’s latest book is OIL AND HONEY: The Education of An Unlikely Activist.

Richard Heinberg
As deadly flooding continues to devastate Colorado, an environmental disaster is brewing. Highly toxic fracking fluids from the state’s many installations for oil and gas extraction are spreading over the flooded landscape. Colorado is one of the nation’s centers for what is being touted as the US “Saudi Arabia” — the vast stores of oil and natural gas trapped in tight formations underground that were impossible to get to until the development of new fracking technologies. 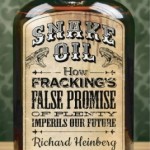 The fracking boom is being called our ticket to energy independence, cheap fuel far into the foreseeable future, a bridge to the coming renewable energy economy, a job creation machine, and a savior to cash-strapped farmers and rural communities. In other words, a panacea to all that ails us. But is it a panacea — or snake oil?

Richard Heinberg is a leading expert on the economic and ecological impacts of fossil fuels. Starting with his book The Party’s Over: Oil, War and the Fate of Industrial Societies, published ten years ago, Heinberg has written eleven books about why we need to get off fossil fuels and transition to safer, cleaner renewables.

His latest, SNAKE OIL, is a gripping, fact-filled but eminently readable book examining how the fracking boom isn’t all it’s cracked up to be. While natural gas prices have plummeted recently, Heinberg says that’s due to an unsustainable bubble in drilling and is likely to be over by 2020. And those behind the gas boom are some of the same Wall Street banks that crashed the economy in 2008.

Meanwhile, the public is being sold on an industry that threatens to poison water supplies forever, explode global temperatures — and devastate the communities hosting its operations. All for a short-term benefit, while saddling us with unsustainable long term costs. Heinberg bases his predictions and analysis on the industry’s own calculations and on robust studies by US government scientists. He is Senior Fellow-in-Residence at the Post Carbon Institute in California.

UPDATE! The New York Times reported on a study that found that methane leaks from fracked wells were not as bad as previously thought. Here’s Richard Heinberg’s response:

The study by scientists at the University of Texas is careful and thorough. It shows that when wells are properly drilled and fracked, methane leakage is minimal. However the study did not examine wells that suffer from bad casings or other problems. This could account for the wide divergence in results with another recent direct-measurement study, by the National Oceanic and Atmospheric Administration (NOAA). The matter will not be settled until the high fugitive methane measurements in the NOAA study are explained.

Read an excerpt from Snake Oil

Bill McKibben
Bill McKibben is a climate hero. In 2009, with seven students at Middlebury College where he taught, he started the global climate action mass movement with the launching of 350.org. That movement has spread like wildfire, sparking the proliferation of grassroots climate activists everywhere.

McKibben’s movement has succeeded in putting the building of the Keystone XL pipeline in doubt — a project that would be game over for the planet if allowed to go forward, according to leading climate scientist James Hansen. And it’s sparked a new fossil fuel divestment movement based on the one that brought down apartheid in South Africa decades ago. A fast-growing list of colleges, cities and other institutional investors are dumping their fossil fuel stocks, as they realize that dirty energy is a bad investment both for the future and their bottom line.

But McKibben is a reluctant activist. A journalist of longstanding, he has been writing about climate change and the environment since his 1982 book, The End Of Nature. We’ve talked to him on this show about his books, Eearth and Deep Economy. His 2012 article for Rolling Stone, “Global Warming’s Terrifying New Math” went viral.

McKibben is most comfortable writing, teaching, and hanging out home in rural Vermont with his family — and neighbors. But he reached a point where the terrifying math of global warming presented him with a problem: was he going to continue just writing about the climate crisis — or was he going to do something about it? McKibben has a daughter. Like any parent, he wants her to have a future.

So he decided to take action. But he still recharges his energy at home — and in conversations with his neighbor, master beekeeper Kirk Webster. What he’s learned from Webster — the careful husbandry of a species that serves us, respecting its health and wellbeing — has informed McKibben about the principles we all need to adopt if we are to survive and thrive. Hence, the title of his newest book: Oil and Honey, The Education of An Unlikely Activist.

Read an excerpt from Oil and Honey