Diogo Castro Freire talks about his film, Facing The Surge. It’s the first in a series planned about the impact of climate change on you and me.

Then, we hear about the little known dangers of rayon manufacturing. Environmental and Occupational  Medicine expert Paul Blanc talks about his book Fake Silk: The Lethal History of Viscose Rayon. END_OF_DOCUMENT_TOKEN_TO_BE_REPLACED

We talk with journalist Jack Cushman about his recent article for Inside Climate News, U.S. and China Ratify Paris Agreement, Upping Pressure on Other Nations. Then climate negotiator Dr. Hugh Sealy tells us about the threats to his island nation and his plans to combat climate change. Finally, a conversation with environmentalist Peter Seidel about big-picture thinking to save the planet. His book is There Is Still Time: To Look at the Big Picture…and Act. END_OF_DOCUMENT_TOKEN_TO_BE_REPLACED

Andrea Wulf talks about her bestselling new book, The Invention of Nature: Alexander von Humboldt’s New World. It’s listed as one of the ten best books of 2015 by the New York Times. Then, we check in with journalist Jack Cushman of Inside Climate News about the historic climate pact out of Paris and how the just-passed omnibus spending bill will affect carbon emissions.  END_OF_DOCUMENT_TOKEN_TO_BE_REPLACED

And finally, we continue our Thanksgiving tradition: Marge Bruchac’s telling of the true story of the holiday. END_OF_DOCUMENT_TOKEN_TO_BE_REPLACED

We spend the hour talking with journalist Joel K. Bourne, Jr. about population, the threat of famine and new ways to prevent it. His book is The End of Plenty: The Race To Feed A Crowded World. END_OF_DOCUMENT_TOKEN_TO_BE_REPLACED

Then, we re-air portions of our 2011 interview with Bacigalupi about his sci fi novel for young adults, Shipbreaker. Also set in the climate-changed world of the near future, it takes place in Florida in a time of sea level rise. END_OF_DOCUMENT_TOKEN_TO_BE_REPLACED

And women mystery writers have gone from being ignored to being stars of the genre. We talk with mystery writer Sara Paretsky about women’s changing position in the genre and about her own socially conscious mystery writing. Then we congratulate Elizabeth Kolbert on her Pulitzer Prize for The Sixth Extinction. END_OF_DOCUMENT_TOKEN_TO_BE_REPLACED 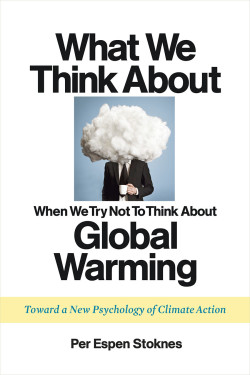 The more we know about climate change, the less we do about it. It’s the “climate paradox.” That’s why we need a new psychology of climate change, according to Norwegian author and economist, Per Espen Stoknes.

His new book, What We Think About When We Try Not To Think About Global Warming, tackles the climate paradox head on in an eminently readable book that should be obligatory reading for all who care about our future and are frustrated at the slow pace of action. END_OF_DOCUMENT_TOKEN_TO_BE_REPLACED

END_OF_DOCUMENT_TOKEN_TO_BE_REPLACED

Naomi Oreskes talks about the speculative novel she co-wrote with Erik Conway, The Collapse of Western Civilization: A View from the Future. Then, as the world prepares for climate talks and the People’s climate march in New York City, we hear our 2010 interview with climatologist Dr. James Hansen.