Why is it so hard to get the hair-on-fire action on climate we need to deal with the crisis? Could it have something to do with our brains? We talk with Dr. Ann-Christine Duhaime about her book, Minding The Climate: How Neuroscience Can Help Solve Our Environmental Crisis.

Then, we talk with one climate activist who’s putting Duhaime’s lessons on how to change minds about the crisis to work: Darr Reilly, co-founder of the Carbon Crew Project.

Ann-Christine Duhaime
As we produce this show, a bomb cyclone is bearing down on the west coast—the second in two weeks. Buffalo New York is digging out of its 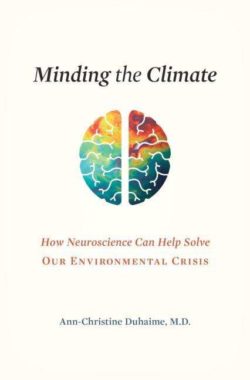 most deadly blizzard, ever. Meanwhile carbon pollution in the atmosphere is spiking to record levels and Europe is basking in record January heat—climatologists say it’s an “extreme event” unlike anything in European history.

The steady drumbeat of climate catastrophe is clamoring in our ears.
But how many people are really listening? Listening in a way to make the changes we need to make in time to survive?

Why aren’t they listening–and is there anything we can do to change that?

Neuroscientist Dr. Ann-Christine Duhaime tackles this question in her book, Minding The Climate. She explores how our long evolution as a species has shaped our brains to respond to immediate threats, but to miss or discount ones that play out over the long term.

But she also shows that the brain’s enormous capacity for change is reason for hope. By understanding both the barriers and the spurs to change, we can move the needle on climate action.

Read an excerpt from Minding The Climate

Darr Reilly, Carbon Crew Project
When Francesca read Ann-Christine Duhaime’s book Minding the Climate, she immediately thought of her friend Darr Reilly. She’s an advocate and practitioner of Drawdown, the climate action movement developed by Paul Hawken. It promotes 100 solutions to the climate crisis that ordinary people can engage in.

Growing out of her work with Drawdown, Reilly co-founded the Carbon Crew Project. It’s a program geared for small groups of friends and neighbors to lessen their carbon footprint, step by step.