Today we have two fascinating interviews, both about how human beings are changing the other species with whom we share the planet.

Later in the show, we talk with evolutionary biologist Beth Shapiro about how humans deliberately change species. Her book is Life As We Made It: How 50,000 Years Of Human Innovation Refined And Redefined Nature.

But first, Thor Hanson tells us about how many species are evolving to adapt to human-caused climate change. His book is Hurricane Lizards And Plastic Squid: The Fraught And Fascinating Biology Of Climate Change. 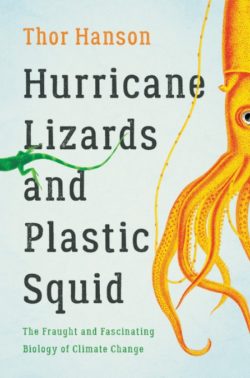 We are in the midst of the Sixth Mass Extinction, thanks to human destruction of habitat through encroachment, pollution and excess carbon emissions. But the news isn’t all bad: Nature is amazingly resilient, thanks to evolution.

While not true for all, some species are adapting: grizzlies in Alaska are shifting their diet to include more berries, as salmon stocks are threatened by warming waters. Brown pelicans are moving north, and long-spined sea urchins south, to find cooler homes. Squid are getting smaller as their food supplies shrink.

In Hurricane Lizards And Plastic Squid, biologist Thor Hanson explores the ways Nature is adapting to our penchant for destruction. A story of hope, resilience, and risk, the book is a reminder of how unpredictable climate change is as it interacts with the messy lattice of life.

Hanson is a biologist and author of several previous books, including Buzz, The Triumph of Seeds and The Impenetrable Forest. 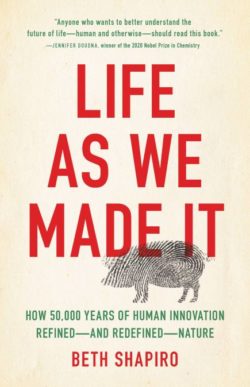 People have been changing other species for 50,000 years. Human pressure helped drive the mammoths and other large animals of the Pleistocene to extinction, for example. Plant and animal breeding for desired traits is millennia old.

But now, with new genetic engineering tools like CRISPR, our power to shape the evolution of other species is practically godlike.

We talk with evolutionary biologist Beth Shapiro about the benefits–and potential harms–these godlike powers could bring with them. Benefits like making coral reefs more resilient to ocean warming; harms like changing species in ways that don’t anticipate problematic knock-on effects. Beth Shapiro explores these issues in her book, Life As We Made It.