We talk with archeologist David Wengrow about the groundbreaking book he co-authored with the late David Graeber, The Dawn of Everything: A New History of Humanity.

We’ve all grown up thinking that the trajectory of human civilization proceeded from so-called primitive egalitarian hunter-gatherer societies to the invention of agriculture with more and more complex social class structures to the modern era of global capitalism with its inevitable hierarchies. 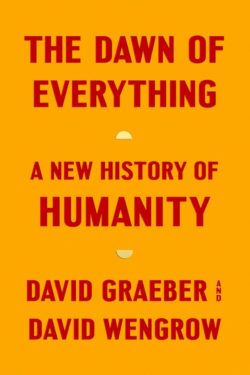 The lesson seems to be: if you want civilization, you just have to put up with inequality and ever more social control by the powers that be. But is that really true?

In The Dawn of Everything, David Wengrow and his co-author, the late anthropologist David Graeber, say human beings have been far more creative in their social arrangements than conventional wisdom can fathom.

For example, there have been highly complex and technologically advanced hunter-gatherer societies. There have also been radically egalitarian agricultural societies like the ancient Mexican one at Teotihuacán. Others, like those in pre-Columbian North America, have flipped back and forth on a seasonal basis between ceremonial authoritarianism and everyday participatory democracy.

Wengrow and Graeber’s groundbreaking book lays out the case in fascinating detail that many other worlds are possible in human society: things don’t have to be the way they are because people are endlessly ingenious in devising the societies they want to live in. And they’ve been doing that for hundreds of thousands of years.

“We are projects of self-creation,” they write. “What if we approached human history that way? What if we treat people from the beginning, as imaginative, intelligent, playful creatures who deserve to be understood as such?”

One review called The Dawn of Everything a “history book for the 99%”. That was a nod to David Graeber, who was one of the original organizers of Occupy Wall Street, with the slogan “we are the 99 Percent.” Graeber died suddenly in September 2020.

David Wengrow is Professor of Comparative Archaeology at University College in London.

Read or Listen to an excerpt from The Dawn of Everything

Next week on Writer’s Voice

We talk with conservation biologist Thor Hanson about his book Hurricane Lizards And Plastic Squid: The Fraught And Fascinating Biology Of Climate Change. Also, evolutionary biologist Beth Shapiro tell us about her book Life As We Made It: How 50,000 Years Of Human Innovation Refined And Redefined Nature.