New Yorker staff writer Elizabeth Kolbert talks about her new book Under A White Sky: The Nature of the Future.

Then, wildlife photographer extraordinaire Ian Shive goes to the volcanic Aleutian islands of Alaska to tell us about the stunning new documentary he’s in, The Last Unknown. It’s streaming now on Discovery2. 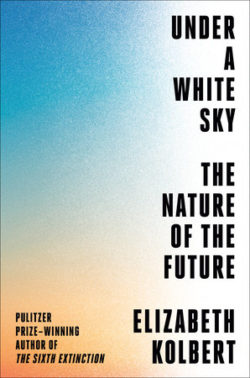 Have you heard the trope that technology will save us from climate catastrophe? Well, that may have to be true—because our inaction now calls for drastic measures.

In her latest book Under a White Sky, Elizabeth Kolbert takes a hard look at the new world we are creating in the so-called Anthropocene Era. She examines how the very sorts of interventions that have imperiled our planet are increasingly seen as the only hope for its salvation. But will the cure be as bad—or worse—than the disease?

By turns inspiring, terrifying, and darkly comic, Under a White Sky is an utterly original examination of the challenges we face.

Elizabeth Kolbert is the author of Field Notes from a Catastrophe: Man, Nature, and Climate Change and The Sixth Extinction, for which she won the Pulitzer Prize and which we interviewed her about in 2014. She’s also a staff writer at The New Yorker.

Read an excerpt from Under A White Sky

The Last Unknown is a thrilling new documentary that’s just started streaming on Discovery2. it’s about a journey wildlife photographer Ian Shive took with scientists of the US Fish & Wildlife Service to the Aleutian Islands, one of the most remote places on Earth, to document wildlife populations like Stellar sea lions and auklet bird colonies.

We last spoke with Shive in December 2020 about his gorgeous coffee table book Refuge, about America’s wildlife refuges. That book and this film are reminders that we still have an abundance of wildlife to save and protect.

Find out more about The Last Unknown