We talk with Ari Rabin-Havt about his campaign memoir, The Fighting Soul: On The Road With Bernie Sanders.

Then we play an excerpt from our 2020 interview with Chuck Rocha, Bernie’s campaign lead on Latino voters, about his book, Tío Bernie.

END_OF_DOCUMENT_TOKEN_TO_BE_REPLACED

In this episode of Writer’s Voice, we continue our Election 2020 series with two looks back—one way back and the other more recent—to derive important lessons for this election season.

First, we talk with John Nichols about his new book, The Fight For The Soul Of The Democratic Party: The Enduring Legacy of Henry Wallace’s Anti-Fascist, Anti-Racist Politics.

Then Bernie2020 campaign strategist Chuck Rocha talks about his new book Tío Bernie: The Inside Story of How Bernie Sanders Brought Latinos Into the Political Revolution.

END_OF_DOCUMENT_TOKEN_TO_BE_REPLACED

The 2020 presidential election is looming on the horizon. Many fear the outcome will be hotly disputed. Yet neither the United States electoral system nor the Constitution is likely to help us out of the mess. We talk with constitutional scholar Alan Hirsch about his book A Short History of Presidential Election Crises: (And How to Prevent the Next One).

Then, Bernie Sanders has indicated he’s probably done running for president. What’s next for the Political Revolution? Micah Uetricht discusses the book he co-authored with Meagan Day, Bigger Than Bernie: How We Go from the Sanders Campaign to Democratic Socialism.

Writer’s Voice — in depth conversation with writers of all genres. On the air since 2004. Rate us on iTunes or wherever you get your podcasts. And like us on Facebook at Writers Voice with Francesca Rheannon or find us on twitter @WritersVoice.

END_OF_DOCUMENT_TOKEN_TO_BE_REPLACED 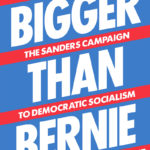 Bernie Sanders suspended his campaign two days ago. The suspension left many grassroots organizations that had endorsed him wondering where to go from here. Francesca speaks with Micah Uetricht, co-author of Bigger Than Bernie, about it. END_OF_DOCUMENT_TOKEN_TO_BE_REPLACED

This week’s episode gives us a sorely-needed message of hope. If we just simply let nature take its course, we can restore the Earth. We talk with Isabella Tree about her book Wilding – the Return of Nature to a British Farm. It’s out from Picador Press.

Then, we talk with Nation magazine contributor Jeet Heer about the Iowa caucus debacle, the progressive wing of the Democratic presidential campaign, and Michael Bloomberg, on its billionaire wing.

Like us on Facebook at Writers Voice with Francesca Rheannon or find us on twitter @WritersVoice. And if you are listening to our podcast, give us some love on iTunes or whatever podcast app you use. END_OF_DOCUMENT_TOKEN_TO_BE_REPLACED

Critics have tried to tar Bernie Sanders with the brush of sexism, implied if not explicit. But gender studies scholar Sara Matthiesen says Bernie could be the first feminist president. We talk with her about her article in the Nation, “Bernie Could be America’s First Feminist President.”

Then, with all its importance to the lives of most Americans, Social Security doesn’t often make it into the headlines. That changed this week when the Sanders campaign charged that Joe Biden’s record on Social Security is flawed, suggesting it could weaken him against Trump in the general election. We spoke with Washington Post columnist Helaine Olen about her recent post, “Sanders is right: Biden is Vulnerable to Trump on Social Security.”

Writer’s Voice — in depth conversation with writers of all genres, on the air since 2004. Rate us on iTunes or whatever podcast player you use!

END_OF_DOCUMENT_TOKEN_TO_BE_REPLACED

We talk with Thomas Lockley about his book, African Samurai: The True Story of Yasuke, a Legendary Black Warrior in Feudal Japan. It’s about the first foreigner and the only African to ever become a samurai.

Then, who—or what—won at Tuesday’s Democratic debate? Political analyst John Nichols of the Nation magazine joins us with his take. His article for the Nation is “Last Night’s Debate Produced a Clear Winner: Medicare for All.”

END_OF_DOCUMENT_TOKEN_TO_BE_REPLACED

Can we get real democracy in the US? We talk with political scientist Patrick Barrett about his article, “Can We Change the Political System? Strategic Lessons of the Bernie Sanders Campaign”.

Then we re-air our 2008 interview with muckraking reporter Greg Palast about his book Steal Back Your Vote. We talk about how voters were disenfranchised by voter purging and other voter suppression methods in past elections — and what voters can do about it. END_OF_DOCUMENT_TOKEN_TO_BE_REPLACED

Linda Coleman talks about her memoir Radical Descent: The Cultivation of an American Revolutionary. Then, Vermont political writer Greg Guma gives WV his take on Bernie Sanders’ presidential bid. He’s been writing about the Senator since the late 1980’s (and you’ll find out why Sanders calls himself a socialist — it’ll surprise you.)

END_OF_DOCUMENT_TOKEN_TO_BE_REPLACED

Most Americans have just been getting to know Bernie Sanders in the last few months, as his presidential bid has gathered a full head of steam. But journalist and author Greg Guma has known him since the 1980’s.  He talks about Sanders’ previous campaigns and and how Bernie Sanders’ current insurgent run has matured him as a candidate. END_OF_DOCUMENT_TOKEN_TO_BE_REPLACED

Then political cartoonist Ted Rall talks about his new political biography, Bernie. It examines Bernie Sanders as an agent for change working within the political system. END_OF_DOCUMENT_TOKEN_TO_BE_REPLACED