Can we get real democracy in the US? We talk with political scientist Patrick Barrett about his article, “Can We Change the Political System? Strategic Lessons of the Bernie Sanders Campaign”.

Then we re-air our 2008 interview with muckraking reporter Greg Palast about his book Steal Back Your Vote. We talk about how voters were disenfranchised by voter purging and other voter suppression methods in past elections — and what voters can do about it.

Why do Americans vote at a lower rate than voters in any other advanced country? Maybe because that’s the way our election system intends it.

Voter suppression takes many forms — and it’s institutionalized by both parties. In fact, that phrase “both parties” is a big part of the problem. In a two party system, there is no real competition. That means the people’s needs and choices are ignored. 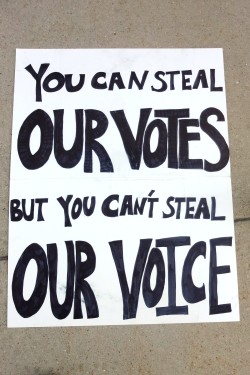 A recent report out from Princeton and Northwestern University found that U.S. government policies rarely align with the preferences of the majority of Americans, but do favor special interests and lobbying organizations.

But that’s not what the two parties favor — and the one candidate in this primary season who does support those policies, Bernie Sanders, has faced enormous institutional roadblocks to his campaign.

Some of those roadblocks appear to be actual election fraud — such as purges of likely Sanders voters and flipping of votes in voting machines from Sanders to Clinton. The number of states where the exit polls differed greatly from the official results raise a red flag.

But fraud isn’t the only way to suppress the vote. Here are some questions:

The majority of US voters are independents with no party affiliation, yet in most states they have no choice of which candidates they will get to vote for in the general election. New York’s closed primary is a case in point.

Suppression takes other forms, too, like voter ID and limiting early voting.

Political scientist Patrick Barrett studies democratic political change and how it happens. His recent article for Truthout Can We Change the Political System? Strategic Lessons of the Bernie Sanders Campaign explores these issues within the context of the current presidential primary season.

Patrick Barrett is director of the A.E. Havens Center for Social Justice at the University of Wisconsin-Madison. He writes and teaches about US and Latin American politics and is the co-editor of The New Latin American Left. 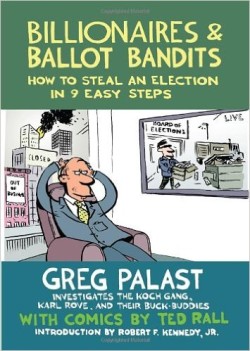 Investigative reporter Greg Palast has been writing about the disenfranchisement of voters since 2000. In 2004 he reported on how thousands of votes for John Kerry were thrown away as “spoiled.”

Then in 2008, he paired up with Robert F. Kennedy, Jr to write a comic book called Steal Back Your Vote (he also wrote the 2012 book titled Billionaires and Ballot Bandits, illustrated by Ted Rall).

Unfortunately, the situation has only gotten worse since that time —especially the purging of voters from the rolls, as in Arizona, New York, Pennsylvania and other states. In light of that, it seemed like a good time to listen back to this interview.

By the way, Francesca spoke to Palast recently for an article he wrote about the New York primary voter purges, “New York Voting Fiasco Just The Warm-up
for the November Game.”