In this episode of Writer’s Voice, we continue our Election 2020 series with two looks back—one way back and the other more recent—to derive important lessons for this election season.

First, we talk with John Nichols about his new book, The Fight For The Soul Of The Democratic Party: The Enduring Legacy of Henry Wallace’s Anti-Fascist, Anti-Racist Politics.

Then Bernie2020 campaign strategist Chuck Rocha talks about his new book Tío Bernie: The Inside Story of How Bernie Sanders Brought Latinos Into the Political Revolution.

John Nichols
The Democratic Party is really two parties. There’s its largely progressive base with a small but growing representation. And then there’s its centrist to center-right corporate dominated leadership. 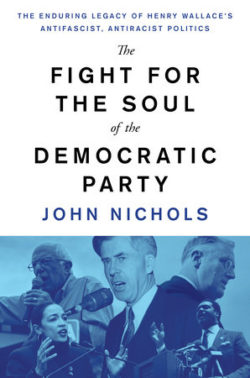 Many think this split began with Bill Clinton and the Democratic Leadership Council. But according to John Nichols, it actually goes back much further, all the way to the 1944 Democratic convention when Henry Wallace was defeated as the choice for FDR’s VP.

Wallace warned of an American fascism rooted in corporate domination and racial and gender oppression. No surprise: The wealthy and the racists in the party hated him for it.

In his book The Fight For The Soul Of The Democratic Party, Nichols takes us from FDR through Truman and down to our times to describe the Party’s split between its left and right wings—and give us the urgent lessons that history has for us today.

John Nichols is the political correspondent for the Nation magazine and the author of many books.

Read the transcript from a clip from our interview with John Nichols.

Read an excerpt from The Fight For The Soul Of The Democratic Party. 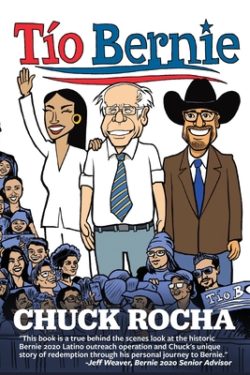 Chuck Rocha was a chief strategist for Bernie Sanders’ 2020 campaign for president and also worked on Sanders’ 2016 bid. While he worked broadly in the campaign, his special mission was to mobilize the Latino vote for the Senator.

He succeeded beyond all expectations. Bernie basically won in Iowa with Latino support. And he crushed it in Nevada with the same. The Latino vote boosted Bernie’s win in California, and came out heavily for Bernie in Texas. But by Texas, all the other Democratic candidates had folded in favor of Joe Biden and Bernie’s campaign collapsed.

In his book Tío Bernie, Chuck Rocha gives us the play-by-play of how the campaign won the Latino vote. He also tells us how a working class Latino kid from East Texas rose to become one of the most important Latino political strategists in the nation.

Chuck Rocha is president of Solidarity Strategies and a co-founder of Nuestro PAC.