Vandana Shiva is a force of nature — and a force for nature. Winner of the alternative Nobel Prize, the Right Livelihood Award, Shiva has been at the forefront of the food sovereignty movement; Her greatest fights have been against GMOs and the patenting of seeds that have bankrupted small farmers throughout the world. As Vandana Shiva says, “Life is not an invention.” 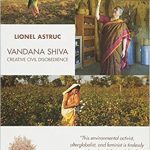 Dr. Shiva Is the founder of Navdanya, an organization dedicated to protecting and promoting biodiversity, native seeds, organic farming and fair trade. She is the author of more than 20 books, including Earth Democracy and Soil Not Oil. The book, Creative Civil Disobedience (Actes Sud 2018) is a series of interviews between Lionel Astruc and Vandana Shiva. It’s one of a three book series published to accompany the award-winning film Tomorrow.