We talk with Irish writer Sinéad Gleeson about her award-winning collection of essays, Constellations: Reflections From Life.

Then, they say the road to Hell is paved with good intentions; that makes for a rich vein for fiction Therese Anne Fowler mines in her new novel, A Good Neighborhood.

When she was thirteen, Sinéad Gleeson fell victim to a mysterious and terrible illness. It crippled her adolescence, undermining her sense of self just as she was developing it.

In her powerful collection of essays, Constellations, Gleeson grapples with how to tell the story of life in a woman’s body, in sickness and in health, in motherhood, and even at the end of life.

Throughout the collection she also turns her restless eye outwards delving into work, art and our very ways of seeing.

Constellations is winner of the Non-Fiction Book of the Year at the 2019 An Post Irish Book Awards. Gleeson is a writer, editor and freelance broadcaster who lives in Dublin Ireland. 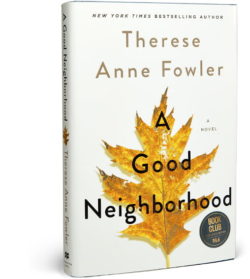 In her new novel A Good Neighborhood Therese Anne Fowler creates a juicy tale centering on what happens when an old neighborhood starts turning into a new one, breaking the connections that neighborhoods depend on.

The book asks big questions about life in America today―what does it mean to be a good neighbor? How do we live alongside each other when we don’t see eye to eye? A Good Neighborhood explores the effects of class, race, and gender in a story that’s as provocative as it is powerful.

In addition to A Good Neighborhood, Therese Anne Fowler is the author of two previous novels, A Well Behaved Woman and Z.

NEWSFLASH! Don’t miss our interview this week with economist Robert Pollin from University of MA. He gives us his take on the stimulus bill, what it does, what it doesn’t do and what it should do.