Unless the unexpected happens, it looks like Joe Biden may very well be the Democratic Party nominee for president. But can he beat Trump? And even if he does, will that really end Trumpism? We talk with Branko Marcetic about his just released book about Joe Biden, Yesterday’s Man: The Case Against Joe Biden.

Then we air an interview from last year and posted to the Writers Voice website with Wendell Potter about the full court press against Medicare For All by industry and the politicians it funds.

Branko Marcetic
Joe Biden is one of the United States’ longest-serving politicians. He’s also one of its least scrutinized. Now that it looks like he may well be the Democratic nominee, maybe it’s time for a crash course on Uncle Joe and his long record in politics. 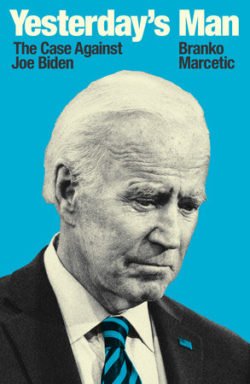 That’s just what we get in Branko Marcetic’s new book, Yesterday’s Man,
The Case Against Joe Biden. Marcetic argues that the electability claim for Biden is weak.

But more than that, Biden’s record indicates the candidate is simply not up to dealing with the profound crises of the 21st century, from climate change to income inequality to a broken health care system in a time of pandemics.

Marcetic says that over nearly fifty years in politics, the man called “Middle-Class Joe” served as a key architect of the Democratic Party’s rightward turn, ushering in the end of the liberal New Deal order and enabling the political takeover of the radical right.

Far from being a liberal stalwart, Biden often outdid even Reagan, Gingrich, and Bush, assisting the right-wing war against the working class, and ultimately paving the way for Trump.

Yesterday’s Man is an essential read for anyone interested in knowing the real Joe Biden and what he might do in office.

Branko Marcetic is a staff writer for Jacobin magazine. Here are links to recent articles he wrote Biden:

For Top Democrats, Joe Biden Is No Al Franken

Wendell Potter
Bernie Sanders’ path to the Democratic nomination has considerably narrowed after his recent losses in the primaries.

But the platform he is running on, like Medicare for All and paid sick leave is, in this age of the COVID19 pandemic, if anything, more relevant. As Sanders said in a recent fireside chat, we are all only as safe the least insured person among us. When people can’t afford to get medical care, they’re a source of infection for everyone.

Since we last talked with health industry author and analyst Wendell Potter last March, several well respected studies have come out saying that Medicare for All would save our health care system hundreds of billions of dollars per year and tens of thousands of lives.

COVID19 has amplified that message by orders of magnitude. The pandemic is showing in stark relief the profound failures of our for-profit health care system to protect us.

Joe Biden said in the last debate (and doubled down on recently) that he would veto Medicare For All. He claimed by way of justification that Medicare for Fall wasn’t working for Italy during the pandemic.

It’s true, Italy is being hit hard because it didn’t impose widespread testing and strict social distancing until the epidemic had taken hold. But without single payer health care in Italy, the terrible toll of the virus would be far worse. We in the US are finding that out: a 17 year old died of COVID19 infection after being refused medical care because he lacked insurance.

We replay my 2019 interview with Wendell Potter.