We talk with book artist Barry McCallion about book art, including his series The Oarsman, which he’s been creating now for fifty years. Then, we replay excerpts from my 2009 interview with Matthew Rose about A Book About Death, the exhibition he curated of art postcards mailed in from around the world.

Writer’s Voice — in depth conversation with writers of all genres, on the air since 2004. Like us on Facebook at Writers Voice with Francesca Rheannon or find us on twitter @WritersVoice.

Rate us on iTunes or whatever podcast app you use! 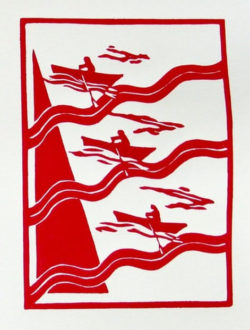 The bookshelves in artist Barry McCallion  are filled with what one journalist called “astonishingly beautiful and  utterly unique books, an artistic treasure trove.” Indeed they are. They combine painting, objects, sculpture and, most of all, imagination to build a narrative that is more evocative than literary.

Much of McCallion’s work is centered on his Oarsman series, books that tell a story through painting, collage and objects that compose a kind of journey.

The series was inspired by a vision. McCallion writes: “In 1970, a man in a rowboat, hovering in the air, appeared suddenly in the middle of my living room. For some time I had been searching for a subject – a theme – that would enable me to combine art with narrative. The Oarsman’s appearance solved the problem.”

Matthew Rose
When we spoke with Barry McCallion (featured in the first segment of today’s show) he spoke about his origins as an artist in the Fluxus Movement, including mail art, where artists mailed pieces of their art to each other in a collaborative process.

Back in 2009, WV interviewed Matthew Rose about an exhibition he mounted in a Fluxus art gallery in Soho in Manhattan. The exhibition was of an unbound book of art postcards he curated, A Book About Death, which was created out of the mailed postcards of artists from around the world.

We play an excerpt from that interview for our second segment today.