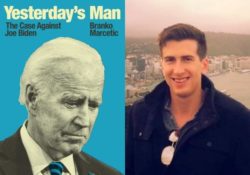 We talk with Branko Marcetic about his recent article in Jacobin, For Top Democrats, Joe Biden Is No Al Franken.

It’s about the differing ways prominent Senators treated sexual harassment claims made against Al Franken, who was pressured to resign his Senate seat, and the sexual assault claim made against Biden by former staffer Tara Reade.

Serious allegations of sexual assault have been made against Joe Biden in the last week or so by Tara Reade. The story was first broken by Ryan Grim on the Intercept and then taken up by progressive outlets such as Democracy Now, the Katie Halper Show and the Hill’s Rising.

But for a long time, the only thing heard from the mainstream media was…crickets. A few minor articles in print but nothing on cable news, at least so far. And crickets has also been the sound coming from the Democratic leadership and Biden’s former Senate colleagues.

But what has been perhaps more surprising is that there has been virtually no reaction from such feminist standard bearers in the Senate as Kirsten Gillibrand and Elizabeth Warren.

Gillibrand has made the fight against sexual harassment and assault a touchstone of her career as a politician. And Warren, who savaged Michael Bloomberg on the debate stage for his treatment of women, made feminism a core value of her presidential campaign. Moreover, the slew of Senators who pressured their colleague Al Franken to resign when he was accused of sexual harassment have also been silent.

That’s what my guest Branko Marcetic found when he reached out to those Senators to get their reaction to the Tara Reade accusation. He wrote a comparison of the treatment of Franken vs Biden in a recent article in Jacobin, For Top Democrats, Joe Biden Is No Al Franken.

Marcetic is the author of a just released book about Biden, Yesterday’s Man. We interviewed him about that book several weeks ago.