We talk with Helen Fremont about her stunning new memoir, The Escape Artist. It’s about the toxic influence of closely held secrets on the glue that should hold families together — and about how trauma echoes down the generations.

Then, Bernie Sanders ended his presidential run this week, leaving Joe Biden the only remaining candidate in the race. We air an interview we did last week with Branko Marcetic about how the Democratic Party is handling allegations of sexual assault against Biden. (It was also published on the WV website as a Web Only Extra.)

Writer’s Voice — in depth progressive conversation with writers of all genres. On the air since 2004. Rate us on iTunes or wherever you get your podcasts. And like us on Facebook at Writers Voice with Francesca Rheannon or find us on twitter @WritersVoice.

Helen Fremont
Anyone who has ever studied the psychology of families knows that secrets are toxic. And they tend to work their poison from one generation to the next. 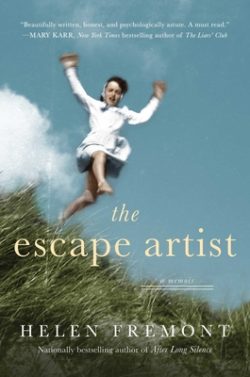 But while that memoir answered many questions about her parents’ past, it left open the question of how long-held secrets affected the family as she and her sister were growing up.

Now, Fremont has come out with a sequel to After Long Silence to answer that question: The Escape Artist. She delves deeply into the family dynamic that produced such devotion to secret keeping, beginning with the painful and unexpected discovery that she has been disinherited in her father’s will.

In a family devoted to hiding the truth, Fremont learns the truth is the one thing that can set you free.

Hear an audio excerpt from The Escape Artist

Tribute to John Prine, who died April 7 from COVID-19.

We learned this week that Bernie Sanders has suspended his campaign. That leaves one remaining candidate to go up against Donald Trump, Joe Biden.

Several weeks ago, we interviewed Branko Marcetic about his new book about Biden, Yesterday’s Man. And last week, we interviewed him about an article he wrote for Jacobin magazine about a development that has serious implications for the candidate and for the Democratic Party’s ability to go up against Donald Trump.

We posted that interview to the Writers Voice website last week, but are including it in this week’s episode, as well.