We spend the hour talking with journalist Joel K. Bourne, Jr. about population, the threat of famine and new ways to prevent it. His book is The End of Plenty: The Race To Feed A Crowded World. 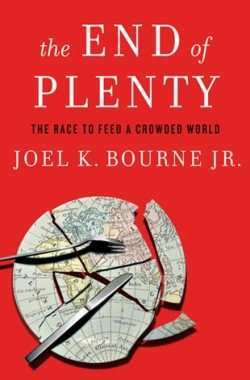 When food riots erupted around the world in 2007 and then again in 2011, it heralded the end of the so-called Green Revolution. That was supposed to make food scarcity a thing of the past.

But a perfect storm is developing that threatens our food supply now and for generations to come — unless we make big changes fast.

Climate change could turn half the world’s arable land into desert by century’s end. Pollution and overuse add to the impact of climate-driven drought on water supplies. Chemical agriculture is poisoning the land, rendering insects and weeds ever more resistant.

Food insecurity leads to wars and unrest — like in Syria and Somalia. Refugee populations are swelling as farming communities fall apart. And, looming over all is an exploding world population that could go from its current 7 billion to more than 9 billion by 2050. We may have already passed Peak Food.

Environmental journalist Joel Bourne takes a hard look at our food supply and the looming threats to it in his new book, The End of Plenty: The Race To Feed A Crowded World (W.W. Norton.) But he also sees room for hope in new ways of farming that increase yields while protecting the planet. The only question is, will we put them in place in time?

Joel K. Bourne, Jr is an award-winning journalist and former senior editor for the Environment for National Geographic. His work has also appeared in Audubon, Science and Outside Magazine. He got a degree in agronomy before becoming a journalist.

Read an excerpt from The End of Plenty