Then, we re-air portions of our 2011 interview with Bacigalupi about his sci fi novel for young adults, Shipbreaker. Also set in the climate-changed world of the near future, it takes place in Florida in a time of sea level rise. 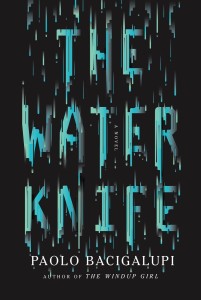 Right now, drought-driven wildfires are raging in the western US. Refugee crises are building worldwide, many with a hidden component of conflict driven by climate change. What happens to a society when there isn’t enough of a critical resource, like water, to go around?

Paolo Bacigalupi’s near-future thriller The Water Knife paints a vivid picture of just what that might look like. U.S. states that have water have closed the borders to states that don’t, as drought refugees from places like Texas clamor to be let in.

The rich live in well-watered enclaves, while municipal water works are blown up by companies or agencies who want to keep supplies for their own.

State governments battle over water rights — using all means legal and illegal to beat out the competition. The dirty work is done by the so-called water knives — undercover operatives whose job it is to cut the water to some so that more powerful others can control it.

Like Bacigalupi’s previous novel Shipbreaker, The Water Knife poses powerful questions about the consequences of denial in a time of global warming. With a driving plot and deeply drawn characters, the book brings home just what we and our children face if we don’t change course now.

Paolo Bacigalupi has written for WIRED magazine, Salon.com and the Magazine of Fantasy and Science Fiction, among other venues. His stories and novels have won numerous awards. In addition to The Water Knife and Shipbreaker, Bacigalupi is the author of The Windup Girl, the Drowned Cities and several books for young readers.

Read the first chapter from The Water Knife 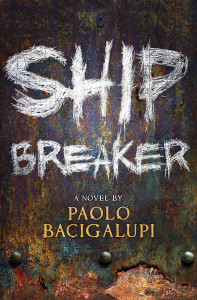 Paolo Bacigalupi’s young adult novel, SHIPBREAKER, tells the story of two teens living in a post-apocalyptic world on the Gulf Coast. Fossil fuels are a thing of the past and most people struggle to survive while the tiny elite live in comfort with their high tech, clean tech marvels.

His protagonist, Nailer, is small — the better to worm into the deepest bowels of wrecked oil tankers to pull out the valuable scrap. He meets an upper class girl after a superstorm wrecks the wind-and-solar powered ship she is traveling in. Together, they set out to save the world from a nefarious cabal.

The plot is familiar, but the finely drawn world of the novel, set sometime within the next 100 years, makes the book a fascinating read. Shipbreaker was a finalist for the National Book Award.

Listen to the entire original interview