Marvin Kitman talks about his article in November’s Harper’s magazine, Murdoch Triumphant. Peter Lehner tells us about the BP Gulf Oil disaster — what allowed it to happen, and what to do about it now. His book is IN DEEP WATER. And we get tips on eating during the holidays from food psychologist Brian Wansink.

It’s safe to say, Rupert Murdoch is the most powerful media voice in America. He reaches millions through his Orwellian-named company NewsCorp, with vast holdings in every kind of media venue from print to broadcast to movies. In his article in the November 2010 Harper’s, Murdoch Triumphant, media critic Marvin Kitman says Murdoch’s media empire is a means to an end — political power.

How did Murdoch manage to get where he is? It took luck, a willingness to skirt the law, and an FCC that fell down on its job. That’s the fascinating story Marvin Kitman tells — and he tells it with scorching panache and style.

In addition to writing for Harper’s Magazine, Kitman is the author of THE MAN WHO WOULD NOT SHUT UP: The Rise of Bill O’Reilly and I AM A VCR, which recounts Kitman’s two decades as a TV critic and how he sees the impact of television on American culture.

Writers Voice interviewed Cornell food psychologist Brian Wansink in 2006 about his book MINDLESS EATING. This Thanksgiving Week, we air an excerpt with some tips for keeping the pounds off during the Holidays.  CORRECTION! In September 2018, Brian Wansink resigned from the Cornell Food Lab after accusations of falsified research came out. Among the papers that were found to be faulty (and were retracted by their publishers) were some featured on this interview.

Listen to the full 2006 interview with Brian Wansink 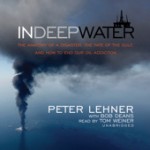 On April 20, 2010, BP’s Deepwater Horizon’s well blew out. The massive explosion that followed took eleven lives, decimated one of the world’s prime fishing grounds, and took the livelihoods of countless residents of the Gulf.

Why did it happen? What happens now? And how can such accidents be avoided in the future? Peter Lehner of the National Resources Defense Council (NRDC) explores these issues in the new book he cowrote with Bob Deans, IN DEEP WATER: The Anatomy of a Disaster, The Fate of the Gulf, and How to End Our Oil Addiction.

Lehner is the executive director of the NRDC and was formerly an environmental prosecutor.