Then, we harken back to our conversation earlier this year with NoViolet Bulaweyo about her novel of Zimbabwe, Glory. It was shortlisted for the 2022 Man Booker Prize.

Omolola Ijeoma Ogunyemi
Omolola Ogunyemi was born and raised in Idbadan, Nigeria but she has lived in the U.S. for many years. Her love for her homeland and its rich culture provide the inspiration for her novel, Jolloff Rice and Other Revolutions.

It’s a collection of linked short stories that follow a group of friends from their early years in a girls’ boarding school, starting in 1986 and into the middle of our century, the year 2050. 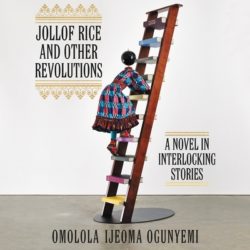 One reviewer said of the book, “Jollof Rice and Other Revolutions celebrates friendship, the power of community and home, and the joy of being a woman able to take control of her destiny… Ogunyemi’s writing has the power to reverberate through generations.”

But as the title expresses, celebration takes place within a political context that poses challenges for the books’ characters and tests their loyalty, their courage and their hopes and dreams for themselves and their families.

As they move between Nigeria and the U.S., they come to realize that while the powers-that-be can be cruel and oppressive in either country, friendship and solidarity provide salvation.

The book emerged from Ogunyemi’s short story, “Jollof Rice and Revolutions,” which appeared in Ploughshares in 2017 and was named to the list of “Other Distinguished Stories of 2017” in The Best American Short Stories 2018. It came out In September 2022, from Amistad Books, an imprint of HarperCollins.

Omolola Ogunyemi’s poetry, short stories and essays have been published widely. Jolloff Rice and Other Revolutions is her first novel. 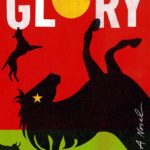 Some of the greatest contemporary women writers writing in English come from the continent of Africa. Think Chimamanda Adichie, for example. It’s probable that our earlier guest today, Omolola Ogunyemi, will join their ranks.

We spoke with her about Glory back in April 2022. We listen back to that conversation today.

Coming up next week on Writer’s Voice, we talk about two terrific books for young (adult) readers of all ages. Devra Lehmann tells us about her philosophical biography, Socrates: A Life Worth Living.

And Seema Yasmin teaches us how to inoculate ourselves against misinformation. Her book is What The Fact? : Finding The Truth In All The Noise.