We talk with digital philosopher Douglas Rushkoff about his book, Survival of the Richest: Escape Fantasies of the Tech Billionaires. It’s about the Mindset of the richest and most powerful moguls on the planet and the destruction it’s leaving in its wake.

Then, Survival of the Richest praises the work of Indigenous philosopher Tyson Yunkaporta. We air our 2020 interview with Yunkaporta about his book. Sand Talk: How Indigenous Thinking Can Save the World.

Six of the ten richest people in the world made their fortunes in the tech industry. And now the richest person in the world, Elon Musk, has joined the ranks of the Tech Overlords with his acquisition of Twitter.

What is the mindset of these rarified members of the human community who rule our lives in so many ways?

It’s something my guest Douglas Rushkoff began to uncover when five mysterious billionaires summoned him to a desert resort for a private talk. They wanted him to tell them how to they could survive the societal collapse they themselves are helping to bring about.

Rushkoff came to understand that these men were under the influence of The Mindset, a Silicon Valley–style certainty that they and their cohort can break the laws of physics, economics, and morality to escape a disaster of their own making—as long as they have enough money and the right technology.

Rushkoff has been in the tech space since the early 90s, when the Internet was supposed to unleash a decentralized democratic global open society. But in Survival of the Richest, Rushkoff describes
an unholy marriage of the digital revolution and capitalism that transformed the dream of a democratic digital revolution into a nightmare of surveillance, disinformation, manipulation and erosion of democracy.

Douglas Rushkoff is professor of media theory and digital economics at Queens/CUNY. He hosts the Team Human podcast and has written many award-winning books. 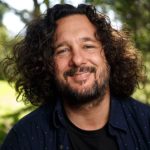 Douglas Rushkoff’s book Survival of the Richest gives a shout out to Australian aboriginal philosopher Tyson Yunkaporta, who is a proponent of the kind of thinking that Rushkoff says is an antidote to the Mindset of the tech billionaires.

Writer’s Voice spoke with Yunkaporta in 2020 about his book, Sand Talk : How Indigenous Thinking Can Save the World. We re-play that interview on this episode.