We talk with Mark Vonnegut about his memoir, THE HEART OF CARING: A Life In Pediatrics.

Then, environmental reporter Oliver Milman tells us about the shocking carbon bomb that President Biden is detonating with his record-breaking sales of oil and gas leases. Milman co-wrote a recent piece in the Guardian, “Us Fracking Boom Could Tip World To Edge Of Climate Disaster.”

And we hear a poem by Mary Oliver, “At The River Clarion.”

Mark Vonnegut
Can you believe there was a time when doctor’s visits were $10 to $20, people paid in cash and, if there was insurance, there were no co-payments and deductibles, or medical debt, because insurance companies didn’t go after patients for not paying their bills?

Sounds improbable these days, but that’s the way it was when my guest Mark Vonnegut—and yes, he is the son of the famous writer—started his practice as a pediatrician.

His new memoir, The Heart of Caring: A Life In Pediatrics, recounts what happened when the medical system started serving insurance company profits instead of patient health. It’s a story we all know well, at least our own versions of it. 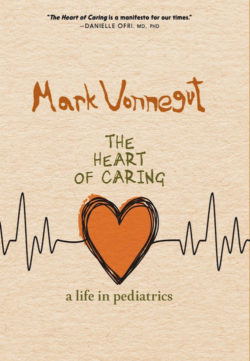 But Vonnegut tells it through the lens of a practicing doctor who has seen the toll it has taken not only on patients but on doctors as well.

Physicians are leaving their profession in droves, beset by burnout, the moral hazard of compromising care to conform to insurance company demands, and the loss of control over their own practice of medicine.

The Heart of Caring is filled with stories that reveal Vonnegut’s commitment to his patients–like Anna Maria, a little girl with an incurable case of bone cancer; and Marlowe, whose life-threatening anemia is cured by his just-born baby brother. Vonnegut reminds us what it means to be a good doctor and why we should care about what happens to good docs like him.

Mark Vonnegut is the author of several previous memoirs, including Just Like Someone Without Mental Illness, Only More So, which recounts his battle with bipolar disorder. Mark Vonnegut practices pediatrics in Quincy, MA.

Oliver Milman
When Joe Biden ran for president, he promised to tackle the climate emergency—he called it existential—that threatens our survival. It gave me hope that finally something might be done to avert the climate apocalypse.

There must be a special place in Hell for politicians who talk the talk on climate but turn around and do the direct opposite. Joe Biden is headed for that Hell.

Unfortunately, he’s bringing the rest of us with him. He just sold a record number of leases to oil and gas companies to drill baby drill on our public lands. As Oliver Milman reports in his recent piece in the Guardian, co-written with Nina Lakhani, Biden’s fracking boom “could tip world to the edge of climate disaster.”

That “could” is being polite. If those drilling leases are exploited, Biden’s carbon bombs will cook the planet. He will be responsible for the deaths of billions of people and the other beings with whom we share this beautiful and endangered home. Our only home.

We last spoke with Oliver Milman about his book The Insect Crisis. He’s the environmental reporter for the Guardian.His piece in the Guardian was

Oliver Milman: US Fracking Boom Could Tip World To Edge Of Climate Disaster