Ever since the original publication of Anne Frank’s diary by her father Otto Frank in 1952, the identity of the betrayer of the Frank’s hiding place to the German authorities has been the burning question about that history. 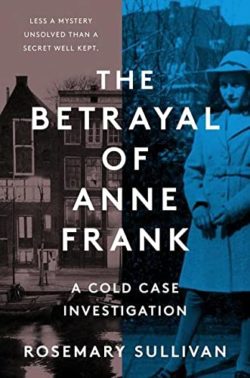 Rosemary Sullivan’s book The Betrayal of Anne Frank was published in mid-January (we’ve interviewed Sullivan before, about her award-winning biography of Stalin’s Daughter.) It takes the reader through “a cold case investigation” undertaken by an investigative team that included retired FBI agent Vincent Pankoke. After examining and rejecting several other figures who have been suspected of the betrayal, the team concluded the betrayer was a Jewish notary named Arnold van den Bergh, who died in 1960.

But soon after the book’s publication, several Dutch historians went public with doubts about the book’s conclusions. Just last week, the publisher of the Dutch edition of the book, AmbosAthos, withdrew it from publication. The American publisher, Harper Collins, is standing by the book. In a statement released to me by Harper Collins, the author Rosemary Sullivan wrote:

“Although I was not involved in the research process, I have full confidence in the investigation led by Vince Pankoke into the betrayal of Anne Frank. Certain critics have questioned the book’s conclusion: that a Jewish notary Arnold van den Bergh gave a list of anonymous addresses to the SD which included that of the secret Annex where Anne Frank and her family were hiding. This conclusion was reached in part because of the lengths to which Otto Frank and Miep Gies went to protect the identity of the betrayer. It is the critics who refer to Van den Bergh as a “traitor.” The team is always careful to see him as a victim whose motive was to save his family from deportation and death under the Nazi occupation. Without requesting a response from Pankoke and his team, the Dutch publisher AmboAthos printed an apology to anyone offended by the book and then withdrew the book. Pankoke has therefore published his rebuttal on the web site: www.coldcasediary.com. While new information is continually coming to light, Pankoke has been able to refute the distorted assumptions the critics say the team makes about the wartime Jewish Council, the existence of lists, and other matters. The team has also been careful to protect the identity of the granddaughter of Van den Bergh. The way she has been manipulated by the press is regrettable.”

In our interview with Rosemary Sullivan, we discuss at length the larger implications for our time of the persecution of the Jews in the Netherlands during World War II: the devastating consequences of hatred and bigotry, the forces that push people to collaborate with oppression, whether under duress or conviction, and the utter failure of violence to do anything but threaten the wellbeing of all.

Interested listeners can explore the controversy at these links:
Critique by historians