Is the 2020 Presidential election being rigged, like Donald Trump claims? Yes, says investigative reporter Greg Palast—it’s being rigged by Trump himself, in collusion with the GOP.

We talk with Palast about his new book on protecting the vote, How Trump Stole 2020: The Hunt for America’s Vanished Voters. It’s about how Trump and the GOP are disenfranchising millions of voters and how to make sure your vote is counted. The book contains a 64-page graphic version, How To Steal An Election: Vote Thieves–The Art of the Steal, by cartoonist Ted Rall. (We’ll be talking with Rall about his new book Political Suicide later in the season.)

Then we hear from election security attorney Robert Fitrakis and a poem by Maya Angelou.

Greg Palast
16.7 million. That’s the number of voters investigative reporter Greg Palast estimates have been lost to the voter registration rolls over the past two years as a result of overzealous purges of likely Democratic voters by Republicans. And that’s only one of a panoply of actions by Trump and Republicans to destroy the fundamentals of democracy: one person, one vote and making sure every vote is counted. 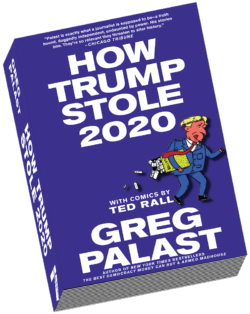 In his new book How Trump Stole 2020, Palast lets us in on the nasty secrets of the assault on democracy by Trump and his GOP supporters.
Palast is the author of several previous books on protecting the vote, including The Best Democracy Money Can Buy, which we spoke with him about in 2016.

Useful Links To Protect Your Vote

Common Cause: Protecting the Right To Vote

Robert Fitrakis
In our interview, Greg Palast mentioned attorney Robert Fitrakis. In 2016, Francesca went to a conference where Fitrakis was speaking about problems with so-called “black box” voting machines and aired a segment on Writers Voice. We play that segment again.

Maya Angelou
Kamala Harris is the first Black woman ever to be chosen as a vice presidential candidate. It’s an historic step forward on representation, whether or not she was your preferred choice for the job. In honor of that, we thought it would be nice to hear Maya Angelou recite her wonderful poem And Still I Rise.