We talk with Paul Tough about his terrific new book, THE YEARS THAT MATTER MOST: How College Makes Or Breaks Us. It asks the question: Is the American system of higher education fair? Or is it designed to protect the privileged and leave everyone else behind?

Then we re-air our 2015 interview with Kristina Rizga about her book MISSION HIGH: One School, How Experts Tried to Fail It, and the Students and Teachers Who Made It Triumph. It’s about a high school in San Francisco with an impressive track record on educating poor, minority and immigrant youth.

Paul Tough
Paul Tough’s last book was the bestseller How Children Succeed. It’s focus was younger kids and how parents and schools can help them realize their academic potential. 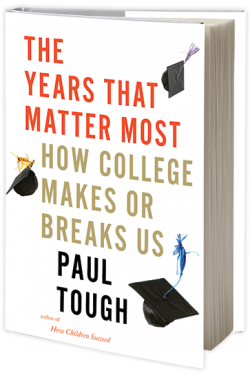 Now, in his new book The Years That Matter Most, Tough turns his attention to higher education. He asks the question: Is the American system of higher education fair? Or is it designed to protect the privileged and leave everyone else behind?

Drawing on new research, The Years That Matter Most reveals how the landscape of higher education has changed in recent decades.

Federal and state governments have slashed funding for public colleges and universities, forcing them to raise tuition to heights that rival private institutions. Top colleges select for high test scores, so those students whose parents can spend thousands on test prep crowd out less privileged applicants.

Add to the mix the favor shown to legacy admissions, and above all, to wealthy students who can pay full freight and access to college becomes ever more narrow for minorities and the working class and poor. Paul Tough says that In a time when a college degree is a basic requirement for almost any good job, the current system is making inequality worse and stifling social mobility.

The Years That Matter Most tells the stories of poor and working class students trying to find their way, with hope and frustration, through the application process and into college. It also explores what some colleges and universities are doing to level the playing field for them.

In addition to authoring four books, Paul Tough is a contributing writer to the New York Times Magazine, the New Yorker, the Atlantic, and other publications.

Back in 2015, WV interviewed Kristina Rizga about her book Mission High. It’s the inspiring story about a school in the heart of San Francisco’s Mission District that is educating a highly diverse and low income student body— and succeeding in sending 75% of them to college. The school is a real community, brought together by a common commitment to excellence and to supporting each students’ path to learning. We play an edited version of that interview.