Dale Russakoff talks about her acclaimed new book, The Prize: Who’s in Charge of America’s Schools. It’s about the ambitious plan hatched by Cory Booker, Chris Christie and Mark Zuckerberg to reform Newark’s schools from the top down.

Then, Kristina Rizga tells the inspiring story of an inner city high school that’s changing students’ lives. Her book is Mission High: One School, How Experts Tried to Fail It, and the Students and Teachers Who Made It Triumph. 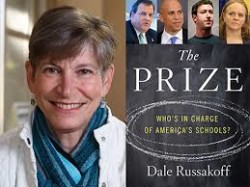 With all the massive use of high stakes testing and holding teachers and schools to strict accountability, American students nationwide are scoring lower on math and reading. But even if their scores were up, would that mean schools were really better? And who gets to decide?

The growing involvement in the school reform movement of some of the biggest names in corporate America begs the question asked in the subtitle of Dale Russakoff’s new book, The Prize. To whit, who’s in charge of America’s schools? And the corollary, what is the best way to improve failing schools, especially those in poor communities of color?

Education philanthropists like Bill Gates and Mark Zuckerberg, along with a number of hedge fund billionaires, think schools should be run like corporations. They want top-down control and strict accountability. Teachers and their unions are seen as the problem. The solution? An industrial education complex made up of highly paid consultants, testing services and charter schools that are privately run (but publicly funded.)

Later in the show, we hear about another approach: one that is teacher-driven and student-focussed. But, in The Prize (the title refers to Newark’s school budget) Dale Russakoff tells the story of how a governor, a mayor and a business tycoon devised a plan to remake Newark’s public schools from the top down — and what happened. The lessons drawn from her book are vital to understanding what really works — and what doesn’t — if we want to give all of America’s kids a good education.

Dale Russakoff was a long-time reporter for the Washington Post, covering politics, education and social policy. While at the Post’s New York bureau, she covered the New York City metropolitan area, including Newark, New Jersey. 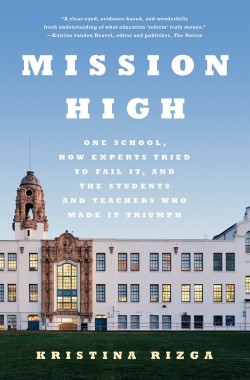 While Dale Russakoff’s The Prize shows the failure of taking a top-down approach to schools reform, Kristina Rizga’s inspiring new book Mission High shows what a bottom-up approach, driven by great teachers and focussed on students’ needs, can do.

Mission High School is in the heart of San Francisco’s Mission District. The school is highly diverse — a rarity in itself. But there is unity in diversity: the school is a real community, brought together by a common commitment to excellence and to supporting each students’ path to learning.

Test scores aren’t high — partly because so many kids are English Language Learners. Many students also contend with all the stresses poverty and racism bring, as well as the legacy of the poor schools they came from. But, as Rizga shows, their academic work is not only up to par, but often far in advance of other kids their age. How this happens is vividly told through the stories of the students and teachers in her book,

Kristina Rizga writes about education for Mother Jones magazine. She’s also written for The Nation, and the LA Times, among others. She co-founded The Baltic Centre for Investigative Journalism, based in her homeland, Latvia. Find links to her articles about education at Writers Voice.net