We spend the hour with playwright, author and activist Eve Ensler, first talking about her latest book, The Apology. It’s written in the voice of her father, who inflicted terrible emotional, sexual and physical abuse on her when she was a child.

Then we air an excerpt from our 2006 interview with her about Ensler’s book, Insecure at Last. 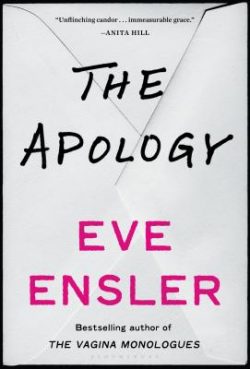 Like millions of women, Eve Ensler has been waiting much of her lifetime for an apology. Starting at the age of five, she was sexually and then physically abused by her father.

Ensler struggled her whole life from this betrayal, falling into addiction and self-destructive behavior as she wrestled with the demons her father had created. All that while, she longed for an honest reckoning from a man who is long dead.

After years of work as an activist in the global movement to combat violence against women, Ensler decided she would wait no longer; shoe could imagine an apology, by her, for her, to her.

The book that emerged, The Apology is written from her father’s point of view in the words she longed to hear. It transforms the abuse she suffered with unflinching truthfulness and compassion into a healing journey of liberation.

Eve Ensler is a Tony Award winning playwright, performer, and activist. Her play, The Vagina Monologues, has been translated into over 48 languages and performed many thousands of times throughout the world.

Ensler’s experience performing The Vagina Monologues inspired her to create V-Day, a global activist movement to stop violence against women and girls. She is the author of numerous other plays and books, including the memoir In the Body of the World.

Read an excerpt from The Apology

INSECURE AT LAST
Back in 2006, I spoke with Eve Ensler about her book Insecure At Last: Losing It in Our Security-Obsessed World. In it she asks whether our fixation on security is making us more fearful than ever. And what does security mean anyway?

In the interview, we explored security, insecurity, and breaking down the walls that make us all less secure. Our interview aired in early January of 2007.

NEXT WEEK ON WRITERS VOICE
We talk with Sara Collins about her acclaimed debut novel, The Confessions of Frannie Langton.

Also on the program is our interview with Christina Proenza-Coles about her remarkable history American Founders: How People of African Descent Established Freedom in the New World.