Writer’s Voice spends the hour with James Forman, Jr., talking about his groundbreaking book, Locking Up Our Own: Crime and Punishment in Black America (Farrar, Straus, and Giroux, April 2017).

It’s a groundbreaking look at how black civil rights leaders and other leaders in the black community contributed to the phenomenon of mass incarceration out of the best of intentions: a fierce desire to protect their communities and the young people in them. 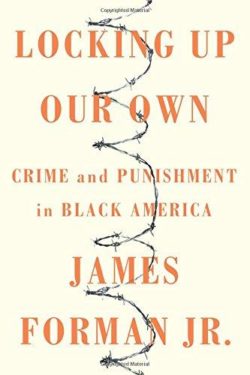 James Forman, Jr.’s book Locking Up Our Own fills in a major gap in our understanding of how mass incarceration grew to the massive presence it now is in black communities throughout the nation.

As the book opens in the late 1960s, a heroin epidemic was devastating black communities. Civil rights leaders, religious leaders and politicians emerging from under the repression of Jim Crow feared that the gains they had made were being eroded by crime and addiction.

They looked to the criminal justice system to protect black communities under siege and advocated for mandatory minimum sentences, higher maximum sentences and stricter policing policies like stop-and-frisk.

Decades later, we all know how that has turned out — from 1980 to 2017, the number of people incarcerated in America quadrupled-from roughly 500,000 to more than 2.3 million, overwhelmingly black and Latino. One in three black men will be under the control of the criminal justice at some time in their lives. Today, the US is only 5% of the global population but has 25% of world prisoners.

Locking Up Our Own is a gripping exploration of how that happened. He also offers solutions to mass incarceration, some of which are already being tried.

James Forman, Jr. was a public defender in Washington DC for six years. He’s a professor at Yale Law School and the  co-founder of the Maya Angelou Public Charter School.

Read an excerpt from Locking Up Our Own