We talk with New Yorker reporter Jane Mayer about her acclaimed book about the Koch Brothers and the network they’ve mobilized for political influence, Dark Money:The Hidden History of the Billionaires Behind the Rise of the Radical Right.

Then, we replay our 2013 interview with filmmaker Tia Lessin, about the documentary she co-directed with Carl Deal, Citizen Koch. It’s about how the Koch Bros. and their rightwing advocacy organization, Americans For Prosperity, helped Wisconsin governor Scott Walker beat back a recall campaign after he devastated public employee union rights.

It’s called by some the Kochtopus – the super secret network convened by the billionaires Charles and David Koch. Its purpose? To take over our political and legislative institutions in order to further a rightwing extremist agenda. 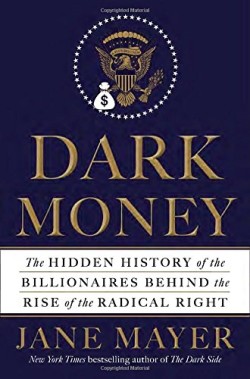 That agenda is to shrink government – at least that part that doesn’t serve the billionaire class itself – things like education, medicare, and social security; cut taxes on the wealthy; and end regulation, especially environmental and labor regulations. Sound familiar? Thanks to the Koch Brothers and their billionaire cabal, it’s become the mainstream mantra of our political class and its pundits.

Jane Mayer’s acclaimed new book Dark Money:The Hidden History of the Billionaires Behind the Rise of the Radical Right traces the development of the Koch network from its origins. Mayer shows how the Koch network has founded think tanks like the Cato Institute, the American Enterprise Institute, the Heritage Foundation and others to set the terms of our political discourse; taken over academia with Koch-funded departments and whole institutions like George Mason University; and established groups like Americans for Prosperity and the American Legislative Exchange Council or ALEC to write legislation, influence races, and buy politicians.

The Koch Brothers and their billionaire network is behind the creation of the Tea Party movement and other similar astroturf operations. It was also behind the case that led to the Citizens United decision of 2010.

Dark Money makes clear in vivid, meticulously researched detail just how the Kochtopus has used ideology to serve itself – not only its profits but also to avoid prosecution for flagrant violations of the law. The book should be required reading for every voter.

Jane Mayer is a staff reporter for The New Yorker. She is also the author of the 2008 best-seller The Dark Side: The Inside Story of How the War on Terror Turned Into a War on American Ideals, and the co-author of two other books.

Read an excerpt from Dark Money

In our first segment, Jane Mayer talked about the secretive advocacy organizations that sprang up like dandelions in the wake of the Citizens United decision of 2010. They claim their mission is education or some such social good, but as Mayer told us, their real aim is to further the right wing extremist political agenda of shrinking government services for the 99%, destroying labor unions, and privatizing schools and other public institutions.

One of the biggest such groups is Americans For Prosperity, founded and funded by coal and oil magnates Charles and David Koch. In 2013 we spoke with filmmaker Tia Lessin about Citizen Koch, the documentary she co-directed with Carl Deal about how Citizens United allowed the Koch brothers and Americans For Prosperity to influence the political process in Wisconsin.

David Koch was the biggest contributor to Governor Scott Walker’s successful effort to hang onto his seat in the face of a recall campaign. That campaign stemmed from outrage at his all out attack on public employees and their unions. The crucial question Citizen Koch poses is “Who owns democracy in America?”

Lessin and Deal were supposed to air Citizen Koch on PBS’s Independent Lens — they had an agreement with the company that supplies the films for that PBS series. But something happened on the way to your screen. Independent Lens caved to pressure from PBS, which was feeling the heat from the Koch brothers. So the showing was cancelled. (Jane Mayer reported on the controversy surrounding the cancellation in the New Yorker.)

Tia Lessin and her co-director Carl Deal were nominated for an Academy Award for their film, Trouble the Waters. They also co-produced Michael Moore’s Farenheit 9/11, Capitalism, A Love Story and Where To Invade Next.

One thought on “The Koch Bros. & Their Billionaire Web”