Stephen Kurkjian talks about his new book Master Thieves. It’s about the record-breaking art heist at the Isabella Stewart Gardner Museum in Boston in 1990 and who might have done it. 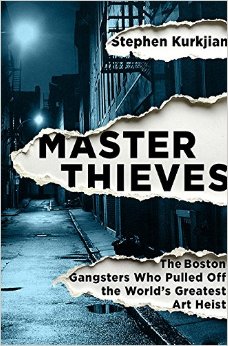 On March 18 1990, two men disguised as Boston police officers walked off with the most valuable single haul of art work in history. Estimated worth — a half a billion dollars, including works by Rembrandt, Vermeer and Manet. Twenty five years later, the spaces where the paintings hung are still empty and the thieves have never been caught.

The loss to the public is incalculable: the exquisite Vermeer painting, The Concert, lost to all except in reproductions. The only major seascape by Rembrandt — Christ in a Storm on the Sea of Galilee — gone.  Why has the FBI, which has poured a boatload of resources into solving the crime, failed utterly at its mission? Why has the $5 million reward and amnesty for the criminals gone unclaimed? Are the paintings even still intact?

These questions are explored in Stephen Kukjian’s new book, Master Thieves: The Boston Gangsters Who Pulled Off the World’s Greatest Art Heist. In the book, he develops a theory about why the theft was committed, who did it, and even why it remains unsolved.

A Pulitzer prize winning investigative journalist who retired from the Boston Globe after four decades of reporting, Kurkjian has been following the case since 1997. He went deep into Boston’s underworld to get the story and ended up questioning the FBI’s conduct of the case.

The book is a page-turner, a true crime story that will have you on the edge of your seat. But Steve Kurkjian’s purpose goes beyond selling the book. He wants to engage the public in the hope that the crime will finally be solved and his beloved Boston will once again host some of the greatest masterpieces ever painted.

Read an excerpt from Master Thieves 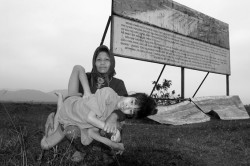 The Vietnam War ended on April 30, 1975. But for thousands of Vietnamese families, the war is still wreaking havoc on their lives. The U.S. dropped more bombs on Vietnam than were dropped on Nazi Germany during WWII. Ten percent of those bombs remained unexploded and they’ve been maiming and killing men, women and children ever since.

An even more insidious injury has been wrought on the genetic health of the population. The millions of tons of herbicides sprayed over the fields and forests of Vietnam by the US have left a legacy of birth defects and cancers that have continued to affect generation after generation born since the war.

George Black writes about that lethal legacy of the Vietnam War in the March 16 2015 issue of The Nation (the story was produced in collaboration with the Food & Environment Reporting Network).

He also writes about Chuck Searcy, a Vietnam Vet who returned to that country decades after the war to undo some of the damage done. Searcy founded Project Renew to find and render harmless unexploded ordinance, as well as help families cope with the effects of defoliants like Agent Orange.

George Black is Editor-at-Large at the Food & Environment Reporting Network (FERN.) His work appears in The Nation and the Los Angeles Times. He writes for onearth.org and is a frequent contributor to the newyorker.com. His most recent book, Empire of Shadows: The Epic Story of Yellowstone, was a finalist for the 2013 Los Angeles Times Book Prize.