In the second episode in The River Runs Through Us, WV examines the life of Sojourner Truth and what she means to us. We talk with Jacqueline Sheehan about her novel about Sojourner Truth, THE COMET’S TALE; with historian Nell Irvin Painter, author of SOJOURNER TRUTH, A Life, A Symbol; and with Rachel Kuhn and Priscilla Kane Hellweg of the Enchanted Circle Theater about their musical play, SOJOURNER’S TRUTH: I Will Shake Every Place I Go To. 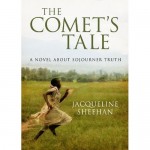 Novelist Jacqueline Sheehan’s 2003 her novel about Sojourner Truth was published under the title, Truth, but she re-issued it in 2011 under a new title, The Comet’s Tale. Here’s a description:

“Born a slave, survived a free bondswoman, reborn an outspoken abolitionist, Sojourner Truth died a heroine of graceful proportions. But the story of her inner struggles is as powerful and provocative as her accomplishments and could be captured only in fiction. This emotionally searing novel beautifully infuses the historical atrocities of the 1800s with psychological speculation of who Sojourner Truth really was, beyond her social and political persona.”

In addition to The Comet’s Tale, Jacqueline Sheehan is the author of the bestselling novel, Lost and Found as well as the novels Now and Then, and Picture This.
Read an excerpt from The Comet’s Tale

When Sojourner Truth came to Florence, a small hamlet in the river town of Northampton, Massachusetts, she went from being mainly a religious preacher to becoming a political activist in the service of equal rights for all. During her stay there from 1843 to 1857, she became involved in the twin movements of abolition and women’s rights, first through the cooperative community she joined, the Northampton Association of Education and Industry.

Historian Nell Irvin Painter is the author of Sojourner Truth: A Life, A Symbol. She says the Northampton Association’s commitment to abolition grew out of it’s philosophy about work and class. She also talks about Truth’s intellectual prowess, her eloquence as a speaker, and her personal courage.

In addition to Sojourner Truth: A Life, A Symbol, Nell Irvin Painter is also the author of The History of White People, Creating Black Americans and Southern History Across the Color Line.
Read an excerpt

Holyoke Massachusetts is a mill city on the Connecticut River. It is home to a unique theatrical company, The Enchanted Circle Theater. The company’s mission is to inspire learning about history by integrating arts and education through living history performances put on in schools and communities.

One example is their theatrical concert, Sojourner’s Truth: I Will Shake Every Place I Go To.
It “explores the extraordinary life of Sojourner Truth – based on primary source documents. Integrating theater, music, dance, projected images and historical text, SOJOURNER’S TRUTH takes the audience on a multi-dimensional tour of Sojourner Truth’s life, exploring her experience as a Northern slave, her spiritual walk to freedom, her search for home and community, and her emergence as one of the foremost public speakers of our time.”

The River Runs Through Us is a special, six-part mini-series exploring the literature, spirit and meaning of the Connecticut River. The series examines contemporary challenges through the creative, metaphorical and historical lens of the Connecticut River by engaging writers, artists and scholars in a long form public conversation.

The River Runs Through Us is funded by a generous grant from Mass Humanities.