Futurist James Howard Kunstler talks about THE WITCH OF HEBRON, his latest novel about a postindustrial, post collapse, America. And John Michael Greer spells out how we get to — and get through — the long emergency. His book is THE ECOTECHNIC FUTURE.

What will be the final straw that brings our civilization down? Pandemic flu? Peak oil? The drought and floods of climate change? Maybe we’ll be lucky and it will just be another mega financial meltdown. It could be any or all of these.

Our guests today are much concerned about the impending decline and fall of our civilization, as they see it. Our first guest, James Howard Kunstler, calls it the Long Emergency; he wrote about it in a nonfiction book of that title. He says it will be driven by the end of cheap, abundant fossil fuels, and will be replaced by a society based on small-scale, agrarian or semi-rural communities.

It’s not all bad. While much is lost, something is gained — greater community and a more intimate relationship with nature. Kunstler wants us to wrap our minds around the looming transition to that future — and he thinks fiction might be the best way to get us to do that. He’s just published the second in a series of novels about that near future society. The first was called, World Made By Hand. His second, THE WITCH OF HEBRON, picks up the thread.

James Howard Kunstler is also the author of The Geography of Nowhere, among other books.

Read an excerpt from The Witch of Hebron 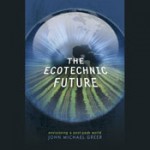 John Michael Greer
Like James Howard Kunstler, John Michael Greer has been thinking and writing about the the end of industrial civilization for a long time. Greer is author of The Long Descent: A User’s Guide to the End of the Industrial Age and his new book is The ECOTECHNIC FUTURE: Exploring a Post-Peak World.

It’s a fascinating read. In it, Greer says we humans are going through a natural process for all species — the process of succession, whereby old stages of existence give way to new ones. Greer says we’ve now passed the stage of abundance industrialism and are in scarcity industrialism. Next to come is salvage industrialism — and, if we’re smart and lucky, an ecotechnic future.

John Michael Greer blogs at the Archdruid Report. You can hear him talk about Druidism and how it connnects with his vision of the ecotechnic future here.