We talk with Malinda Lo about her award winning novel, Last Night At The Telegraph Club. It’s a YA historical novel about a Chinese American lesbian.

Then Syed Masood tells us about his new novel, The Bad Muslim Discount. It’s a poignant, funny and profoundly human novel about Muslim immigrants finding their way in modern America. 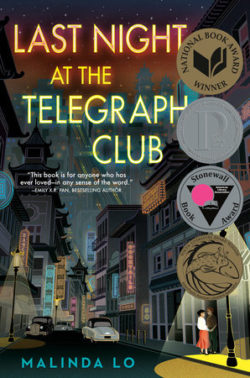 It’s 1954 and Lily, a Chinese American teenager in San Francisco, is discovering her sexuality—she likes girls—and her interest in aerospace engineering. Neither interest goes over well with her family.

How she navigates the conflicting pulls of her family, a budding romance and her identity as a person is explored in Malinda Lo’s wonderful novel, Last Night At The Telegraph Club.

Ms. Magazine called it “the queer romance we’ve been waiting for” but it’s much more than a romance. Lo’s novel is a portrait of a time and place that few people know about: the San Francisco lesbian community in the midst of one of the most repressive eras in American history, told from the Chinese American perspective.

Now out in paperback, Last Night At The Telegraph Club won the National Book Award, the Stonewall Book Award, and the Asian/Pacific American Award for Literature, among others.

Listen to an excerpt from Last Night at the Telegraph Club

Syed Masood
Following two families from Pakistan and Iraq in the 1990s to San Francisco in 2016, Syed Masood’s new novel The Bad Muslim Discount is a poignant, funny and profoundly human novel about Muslim immigrants finding their way in modern America.

Read an excerpt from The Bad Muslim Discount