We talk with David Talbot about the book he co-authored with his sister Margaret Talbot, By The Light of Burning Dreams: The Triumphs and Tragedies of the Second American Revolution. 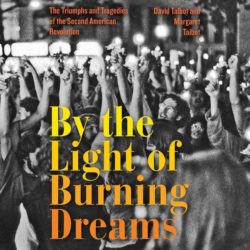 The 1960s and 70s were a time of political and cultural upheaval. Those who took active part in the  movements of the day were convinced that they would revolutionize America. They would bring about racial justice, end US imperialism, unite the working class and liberate women from their patriarchal chains.

But, half a century later, it’s clear the struggle continues—and the threats against social and economic justice are only   multiplying.

So, was it all in vain? And what can we learn from the successes and failures of those movements?

In By The Light of Burning Dreams, New York Times bestselling author David Talbot and New Yorker journalist Margaret Talbot illuminate “America’s second revolutionary generation” in their gripping history of one of the most dynamic eras of the twentieth century.

By examining seven leaders of the social movements of the time, including Tom Hayden and Jane Fonda, Russell Means of the American Indian Movement, Bobby Seale of the Black Panther Party, Cesar Chavez and Dolores Huerta of the United Farm Workers, and the women behind the Jane Collective feminist abortion network in Chicago, they reveal the insights that galvanized these modern revolutionaries, leading them to create alliances between individual movements and across race, class, and gender divides.

David Talbot is a journalist, author, activist and independent historian. He is the author of six books including, Brothers: The Hidden History of the Kennedy Years and The Devil’s Chessboard. Margaret Talbot is a staff writer for the New Yorker magazine.