We talk with Cal Flyn about her book, Islands of Abandonment: Nature Rebounding in the Post-Human Landscape.

Then, just in time for Pride Month, James Romm tells us about his book The Sacred Band: Three Hundred Theban Lovers Fighting To Save Greek Freedom.

Writer’s Voice — in depth conversation with writers of all genres, on the air since 2004. If you subscribe to our podcast, give us some love on wherever you get your podcasts. It really helps others to find the show.

Cal Flyn
After the nuclear disaster In Chernobyl, only a handful of people went back to their dangerously irradiated homes. But animals that haven’t been seen there in centuries have returned — wolves, bears and other denizens of wild places. 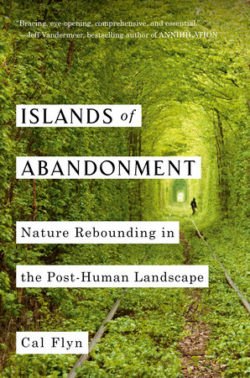 The devastated Bikini Atoll, site of the the last atomic bomb test, the biggest nuclear explosion ever set off—is teeming with underwater biodiversity.

These and other so-called “wastelands” are the subject of Cal Flyn’s extraordinary book, Islands of Abandonment. She says we need to see these areas not as ruined places but as testaments to the incredible resilience of life.

Exploring extraordinary places where humans no longer live (or survive in tiny, precarious numbers), Islands of Abandonment give us a glimpse of what nature gets up to when we’re not there to see it.

Cal Flyn is an award-winning writer from the Highlands of Scotland. She writes literary nonfiction and long-form journalism. Flyn is also the author of another work of nonfiction, Thicker Than Water.

Read an excerpt from Islands of Abandonment

James Romm
Long before Don’t Ask, Don’t Tell made miserable the lives of gay servicemen and women in the US Armed Forces, there was an army of male warrior-lovers who dominated the ancient world. Their leadership of ancient Greece came about as a daring act of resistance, defending democracy against the authoritarian Spartan regime that had taken over their city-state of Thebes. 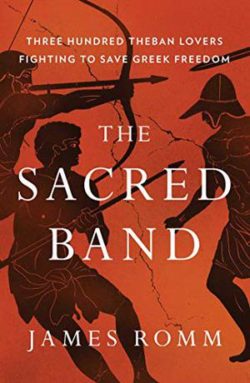 In his book, The Sacred Band, Classics scholar James Romm takes a deep dive into the last decades of ancient Greek democracy leading up to Alexander the Great’s destruction of Thebes.

The story of the Sacred Band, an elite 300-man corps recruited from pairs of lovers, highlights a chaotic era of ancient Greek history, four decades marked by battles, ideological disputes, and the rise of vicious strongmen. At stake was freedom, democracy, and the fate of Thebes, at this time the leading power of the Greek world.

James Romm is the author of numerous books and edited volumes about ancient Greece and Rome, including his biography of Seneca, Dying Every Day, that we spoke with him about in 2015. He teaches classics at Bard College.

Next Week on Writer’s Voice

We talk with Ann Armbrecht about her groundbreaking book about the herbal supplement industry, The Business of Botanicals. We also learn all about recycling from Jenny Romer. Her book is Can I Recycle This?