We talk with Jess Walter about his novel The Cold Millions. It’s about the first Gilded Age with striking parallels to the Gilded Age 2.0 we’re living in right now.

Then, we revisit our 2015 interview with Lara Vapnek about her biography of one of the historical characters who appears in Walter’s novel: Elizabeth Gurley Flynn. It’s called Rebel Girl.

Love Writer’s Voice? Please rate us on your podcast app. It really helps to get the word out about our show. And like us on Facebook at Writers Voice Radio or find us on Twitter @WritersVoice. 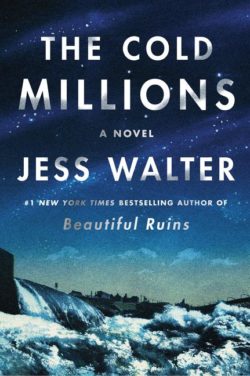 In 1909 Spokane Washington was the setting for one of the most important civil rights battles in our history. But the fight wasn’t about racial justice. It was about free speech—specifically the right of workers to organize in the public sphere for labor rights.

It’s an intimate story of brotherhood, love, sacrifice, and betrayal set against the backdrop of an early twentieth-century America that eerily echoes our own time, with its chasm between rich and poor. The Cold Millions is a compulsive read, featuring an unforgettable cast of cops and tramps, suffragists and socialists, madams and murderers.

Jess Walter is the author of nine books, including the bestselling novel The Beautiful Ruins.

Read an excerpt from The Cold Millions

Lara Vapnek
Back in 2015, we talked with historian Lara Vapnek about her biography of the great labor organizer and champion of civil liberties, Elizabeth Gurley Flynn.  We replay a long excerpt from that Writers Voice episode.

Listen to the extended interview