We talk with historian Douglas Boin about his fascinating biography, Alaric The Goth: An Outsider’s History of the Fall of Rome. It’s a cautionary tale about how xenophobia and anti-immigrant bigotry led to the Sack of Rome and the fall of the Roman Empire.

Then we hear from Jim Walsh of Food and Water Watch about legislation proposed by AOC to ban fracking.

Writer’s Voice — in depth progressive conversation with writers of all genres. On the air since 2004. Rate us on iTunes or wherever you get your podcasts! Like us on Facebook at Writers Voice with Francesca Rheannon or find us on twitter @WritersVoice. 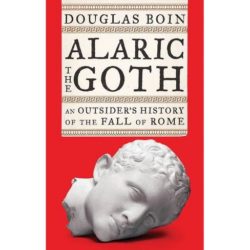 On August 24 in the year 410 CE, Alaric and his army of Visigoths mounted a sneak attack on Rome. They sacked the city and helped put an end to the Roman Empire.

The Romans called the Goths barbarians. It was an ethnic slur and part of a xenophobic, anti-immigrant culture, one that had replaced Rome’s former promotion of multiculturalism.

Distrusting the Roman narrative about Alaric, historian and classics scholar Douglas Boin set out to write his biography from his subject’s point of view, not that of his enemies. The tale he uncovered in his book Alaric The Goth has important lessons for us today.

Douglas Boin is professor of history at St. Louis University and the author of several other books about late antiquity and the end of the Roman Empire.

More Info on Alaric the Goth from Douglas Boin

Joe Biden’s climate plan has been hailed by activists as the most far-reaching policy proposal to tackle the climate crisis by a presidential nominee. It was developed by one of those joint Biden/Bernie Sanders task forces and included key members of the Sunrise Movement.

But there is something important missing from it–a fracking ban. But a bill proposed in Congress by Alexandria Ocasio-Cortez and Bernie Sanders seeks to remedy that lack. We play an excerpt from our online-only July interview with Jim Walsh of Food and Water Watch about the bill. Read more here.