Today, we talk with spy fiction writer Alan Furst about his latest book, Under Occupation. Then we air excerpts from interviews we did with him about his previous novels, Spies of the Balkans and The Foreign Correspondent.

We also play a recording of a poem by the Greek poet C.P. Cavafy, Waiting for the Barbarians, translated from the Greek by Edmund Keeley.

Under Occupation
Master of suspense Alan Furst sets his “Night Soldiers” novels in Europe just prior to and during WWII. Most of them take place in the Balkans, with sorties to his favorite city in the world, Paris. They deal with the fight between freedom and fascism and the choice between saving yourself or risking your life for the common good. 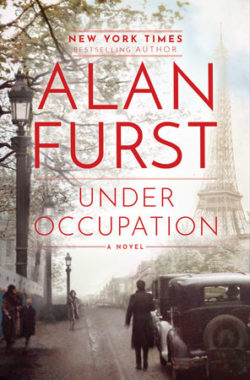 His latest, Under Occupation, is set in Paris in 1942. Novelist Paul Ricard is reluctantly drawn into the Resistance against Nazi Occupation when a man being chased by the Gestapo hands him a strange-looking document just before dying. It looks like a blueprint of a part for a military weapon, and Ricard realizes he must try to get the diagram into the hands of the resistance network.

Under Occupation portrays the time in unerring and fascinating detail. It also gives Furst the space to let the reader in on the process of writing suspense fiction, in the persona of the writer Ricard. Instructive and entertaining, the book is a worthy addition to Furst’s long line of such novels.

Francesca sat down with Alan Furst in his tiny writing studio in Sag Harbor, New York. He’s a disciplined writer, putting in four hours every morning, during which time he’s sustained just by coffee and the occasional cigarette. It’s a pace that’s produced some 15 published works, among them Night Soldiers, The World at Night, Dark Voyage, The Foreign Correspondent and Spies of the Balkans.

READ AN EXCERPT FROM UNDER OCCUPATION

It’s 1940. Mussolini’s Italy threatens from the North — and behind Italy, the shadow of Hitler’s war machine menaces. Furst’s new hero, Senior Police Official Costa Zannis, is drawn into the effort to save his homeland — and Europe’s Jews from the evil that is hunting them.

This time the action takes place mainly in Paris. Journalist, Carlo Weisz is an expatriate Italian fighting the Mussolini regime by writing for the opposition newspaper, the Liberazione. The year is 1938, the storm clouds of war are gathering on the horizon, and Weisz is struggling to keep both his paper and himself alive.

The book is a compelling portrait of Europe as it struggles with the opposing forces of fascism and freedom — forces that find their echoes today as democracy is under attack here and abroad and we are faced with yet another dangerous war in the Middle East.