We talk with Anand Giridharadas about his groundbreaking new book, Winners Take All: The Elite Charade of Changing the World.

Then, we find out about a different way of doing business: the cooperative movement that’s sweeping the globe. We talk with Nathan Schneider about his book, Everything For Everyone: The Radical Tradition That Is Shaping the Next Economy. 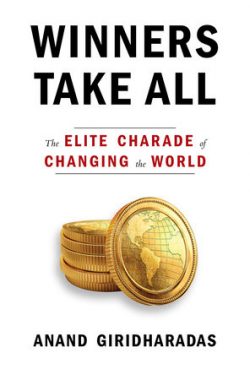 When Anand Giridharadas finished his book Winners Take All, he didn’t know if it would be praised — or pilloried.

That’s because it blows the cover off how the efforts of the global elite to “change the world” for the better actually preserve the status quo — a status quo that causes the very problems their philanthropy later tries to solve.

Giridharadas is no stranger to those elites. As a former New York Times columnist, a commentator for CNN, MSNBC and NPR, and a speaker at TED and the Aspen Institute, he’s rubbed shoulders with the lords and ladies of what he calls a new kind of feudalism.

Surprisingly,  some in those elites have been receptive to his message — even though he pulls no punches. He asks hard questions like,  “Why should our gravest problems be solved by the unelected upper crust instead of the public institutions it erodes by lobbying and dodging taxes?”

For years, the claims of corporate social responsibility by large corporations have often gone unchallenged. Now, in Winners Take All, Giridharadas tackles the myths of philanthrocapitalism in a way that even the elites cannot ignore.

Read an excerpt from Winners Take All 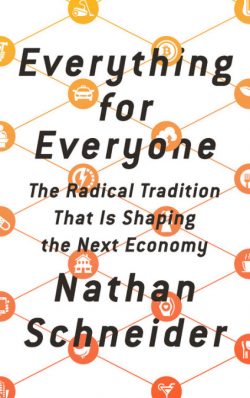 As we heard in the first part of the show, a new feudalism is on the rise. While monopolistic corporations feed their spoils to the rich, more and more of us are expected to live gig to gig. But, as Nathan Schneider shows in his book Everything For Everybody, an alternative to the robber-baron economy is hiding in plain sight; we just need to know where to look.

Cooperatives are jointly owned, democratically controlled enterprises that serve the economic and social needs of their members. Free of the tyranny of the investor class, they can put community and environmental needs first.

They often emerge during moments of crisis not unlike our own, putting people in charge of the workplaces, credit unions, grocery stores, healthcare, and utilities they depend on.

Cooperative already comprise 10% of the global economy. In his book, Nathan Schneider chronicles this revolution that is spreading within the capitalist economy while creating a more democratic alternative to it.

Listen to an excerpt from the audiobook version