Today, we feature two books aimed at children and teens. We talk with Lawrence Goldstone about his book, Unpunished Murder: Massacre at Colfax and the Quest for Justice. It’s about a massacre of African Americans that occurred almost 150 years ago and the Supreme Court verdict that overturned their convictions. The case centered around an interpretation of the 14th Amendment — an amendment that is under attack today by our president and his Republican allies.

Then, we talk with children’s book author Susan Wood about her picture book biography, Elizabeth Warren: Nevertheless, She Persisted.  It is charmingly illustrated by Sarah Green.Lawrence Goldstone

This week, President Trump announced he intends to issue an executive order that would overturn a fundamental right written into the 14th Amendment of the US Constitution — the right to citizenship for every individual born in the US. 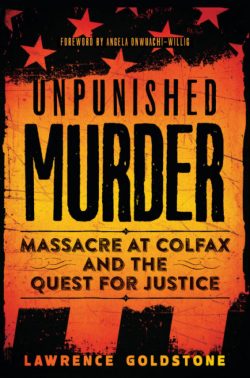 It was passed to right a wrong: to bring African Americans freed from slavery by the Emancipation Proclamation into the body politic as full citizens. It also has been the basis for voting rights and the very notion of equal access to due process under the law for all those who reside in our nation — all rights under attack from this administration and the Republican-dominated Supreme Court and Congress.

Author Lawrence Goldstone is a freelance constitutional scholar — among his many books have been several focusing on issues of racial justice and constitutional rights. Now, he’s come out with Unpunished Murder, a page-turner for young adults and their parents that examines racial justice in the context of a terrible massacre in Louisiana in 1873, during Reconstruction.

It was a time when Radical Republicans were trying to create a legal framework to guarantee equal rights to all, without regard to racial origin. Southern Democrats, the white elite and white terror organizations like the KKK were fiercely fighting to reinstate slavery in all but name.

The massacre in question occurred during an assault on a black community in Colfax, Louisiana, a community established by freedman seeking a better life.

What happened to the perpetrators has repercussions that continue to reverberate in our body politic to today. Unpunished Murder is written for middle and high school student and their parents, with vivid characters and page-turning descriptions of dramatic events.

Lawrence Goldstone is the author of numerous works of fiction and nonfiction, several of which deal with constitutional law and race in American history, including, Dark Bargain, Inherently Unequal: The Betrayal of Equal Rights by The Supreme Court, 1865-1903 and his latest, Unpunished Murder.

Read an excerpt from Unpunished Murder

Author Susan Wood has written a number of biographies for children, including one about artist Grant Wood and Mexican musician Juan Garcia Esquivel. 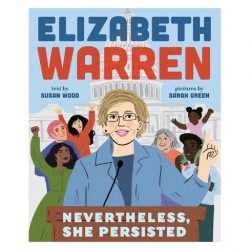 Now, she’s come out with a picture book biography of US Senator Elizabeth Warren. The book focuses less on politics than on character: Warren’s championing of economic justice for America’s poor and middle classes — and, of course, her penchant for persistence.

That was most celebrated — or shall we say scorned — by Senate Majority Leader Mitch McConnell, when he complained that, despite the Republican majority’s attempt to silence her, Warren persisted in reading a letter from Coretta Scott King into the record during Attorney General Jess Sessions’ confirmation hearing.

In her book, Elizabeth Warren: Nevertheless, She Persisted, Susan Wood goes back to Warren’s childhood for the roots to her persistence in defending the rights of those who are socially and economically marginalized. Although the book is for grade schoolers, it will inform anyone wanting to know more about this important public figure.