Lauren Markham talks about The Far Away Brothers (Crown 2017), her spellbinding story of two young migrants from El Salvador and the life they are making in America. Then, we hear poet Eduardo Corral read his poem, In Colorado, My Father Scoured and Stacked Dishes. And finally, we talk with singer-songwriter Don Arbor about his welcome song to immigrants Everyone Comes From Somewhere. 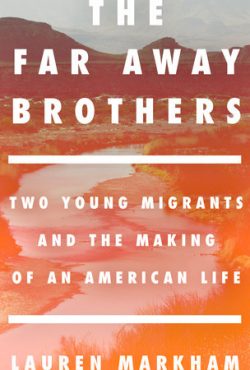 On May 7, Attorney General Jeff Sessions warned families from Central America and Mexico that the US government will take their children away from them — no matter how young those children are — if parents try to bring them into the US illegally. He called it “smuggling”, painting mothers with babies as some kind of criminals — as though babies were dangerous drugs.

Sessions thinks this kind of unbounded cruelty will deter migrant families from trying to cross the border. But that’s unlikely, as the recent migrant caravan arriving at the Texas border shows.

And it’s not just parents with children — children without parents are also making the perilous journeys from their homelands. That’s because they face the draconian choice: flee or risk death at the hands of gangs.

In her book The Faraway Brothers, Lauren Markham tells the story of two young migrants, twins Ernesto and Raúl, who fled gang targeting at home to make a life in America. They nearly died in the desert on the US side of the border. But they made it to California, joining their older brother who had migrated before them. Markham’s remarkable tale brings home the promise and peril that immigration means for so many children in America today.

Lauren Markham is a writer and reporter based in Northern California. She writes fiction, essays and journalism, mostly about migration, youth and the environment.  The Far Away Brothers is the winner of the 2018 Ridenhour Book Prize, was named a New York Times Book Critics’ Top Book of 2017, and has garnered other awards. Markham also works at a high school for immigrant youth in the Bay Area, where she met the Ernesto and Raul.

Laura Markham, “Gangs in the USA”

Sometimes a song says it better than a whole book. California-based singer-songwriter Don Arbor has written topical songs before. His newest is about immigration — and keeping America’s welcome to immigrants alive. It’s called Everyone Comes From Somewhere.