Dispatch from the Dark

Speaking of the dark: It’s past midnight, and we’re lying in bed. “I just can’t wait for things to get back to normal,” says John from his side of the moon. 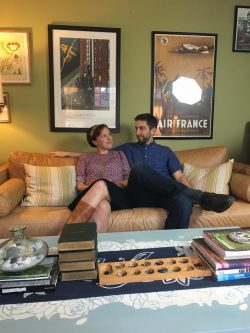 I’m not sure how to respond. I hadn’t realized how attached I have become to the idea that, even in all of this, we are moving ahead somehow, and that dealing with all this is something to value. I feel a sharpness in my throat, the slip of the sureness beneath me.

“I can’t handle you saying that,” I say after a silence, even though I know he isn’t trying to fight. “Thinking that way kind of invalidates my whole life right now. I have to love these days in the same way I love any other. There might not be a ‘normal’ from here on out.”

He’s not happy. I feel the cool bricks of an invisible wall settling into place between us. I turn away to face the window, a heavy orange haze filtering in through the trees. It’s not as dark out as it should be.

“I don’t believe you,” he says. “I don’t think you’re being honest.” It’s the tone I’ve heard him use when I’ve told him I think he’s being a shitty parent. Or that no matter what I’m probably never going to like watching hockey. Anger that morphs from hurt. “I really think you’re in some kind of whacked-out denial right now if you think these days are loveable.”

“These days are days,” I say, calm and furious. “We choose how we hold them. Good night.”

“I know,” I say, scootching a little toward him but still facing away. “So am I.”

Montaigne: “I learn to mistrust my steps everywhere, and I take care to control them.”

He also believes in lively shouting matches before meals and only “begetting children” before sleep. We are doing it all wrong.

[From The Bright Hour: A Memoir of Living and Dying by Nina Riggs. Copyright © 2017 by Rinna Riggs. Reprinted by permission of Simon & Schuster, Inc.]