We spend the hour on an issue that should concern every parent: the growing evidence that the dominance of digital tech is threatening our kids’ development, causing an addiction crisis that science is just beginning to understand.

Addictions expert Dr. Nicholas Kardaras talks about his book, Glow Kids: How Screen Addiction Is Hijacking Our Kids-and How to Break the Trance.

Screens are everywhere and our kids are everywhere on them — and on them all the time. Whether it’s tablets, phones, computers, video game consoles or even TV, the blue screens are glowing in front of our kids eyes an average of nine hours a day. 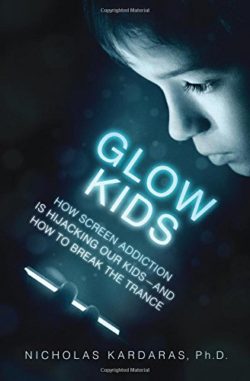 It’s a gigantic uncontrolled experiment and we are just beginning to understand the consequences. The toll in mental health is sobering, from ADHD to video game psychosis to Facebook-induced depression and anxiety.

But the impact on brain development is just as scary — social skills are eroding, the ability to see, hear and feel colors, sounds and textures is becoming impoverished, and critical windows for brain development are being missed as kids inhabit most of their waking lives in the digital realm.

Yet the appetite of schools and parents for more and more tech for their kids seems insatiable, as they fall under the sway of the digital pushers, the tech industry.

Addictions expert Dr Nicholas Kardaras says screens are a kind of digital cocaine, hijacking the reward pathways of the brain just like other addictive substances. He explores a growing mountain of clinical research about this new addiction crisis in his book Glow Kids: How Screen Addiction Is Hijacking Our Kids-and How to Break the Trance.

Nicholas Kardaras is Director of the Dunes, a rehab center in East Hampton, NY. He is a frequent contributor to Psychology Today and has appeared on the CBS Evening News, NPR and elsewhere.

Read an excerpt from Glow Kids

Screens In Schools Are a $60 Billion Hoax