Lesléa Newman talks about her latest book of poetry, I Carry My Mother (Headmistress Press, 2015). The elegiac volume is composed of poems chronicling her mother’s last illness and dying, as well as her own grief. 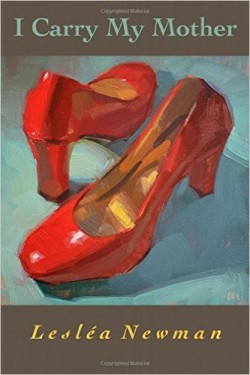 Lesléa Newman is best known as the author of the groundbreaking children’s book, Heather Has Two Mommies. It was the first children’s book to portray lesbian families in a positive way and became a runaway bestseller. She went on to write many more books for both kids and adults.

But before she became a bestselling author, Newman was a poet — and she has continued to write and publish poetry throughout her prolific career.

Lucky for us — because Lesléa Newman newest book of poems, I Carry My Mother, is a moving chronicle about her mother’s last months of life and dying, as well as a profoundly personal yet universal expression of her grief. Newman took care of her mother during that time — and, while it was hard for both mother and daughter, the love between them sustained and nourished them.

The poems in her book are a powerful testament to that love. And they sustain and nourish the reader, as well, especially those of us who have cared for and mourned the passing of our own parents.

Lesléa Newman is the author of seventy books including A Letter to Harvey Milk, Nobody’s Mother, The Boy Who Cried Fabulous, and Heather Has Two Mommies. She writes about lesbian identity and Jewish identity. A Letter To Harvey Milk has been made into a film and adapted for the stage.

Watch the trailer for I Carry My Mother

I CARRY MY MOTHER

I carry my mother wherever I go
Her belly, her thighs, her plentiful hips
Her milky white skin she called this side of snow
The crease of her brow and the plump of her lips

Her belly, her thighs, her plentiful hips
The curl of her hair and her sharp widow’s peak
The crease of her brow and the plump of her lips
The hook of her nose and the curve of her cheek

The dark beauty mark to the left of her chin
Her deep set brown eyes that at times appeared black
Her delicate wrist so impossibly thin
I stare at the mirror, my mother stares back

Her deep set brown eyes that at times appeared black
Her milky white skin she called this side of snow
I stare at the mirror, my mother stares back
I carry my mother wherever I go

“I Carry My Mother” copyright © 2015 by Lesléa Newman from I CARRY MY MOTHER (Headmistress Press, Sequim, WA). Used by permission of the author.

[Her] psychological and linguistic adventures in poetry are unlike anyone else’s. Celebrating the instabilities of our experience, her poems maneuver kaleidoscopically between ordinary life and myth or fairy tale, vital human concerns such as identity and dreamlike atmospheres where nothing stays as it appears for long. 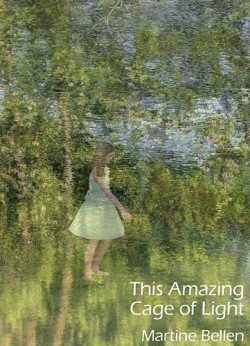 Bellen’s new book This Amazing Cage of Light contains a retrospective collection from five of her previous poetry volumes as well as new poems.

Her work has been informed by such disparate influences as Zen koans and the history of the American West. One full cycle, “The Tale of Murasaki,” is about the medieval Japanese novelist, Murasaki, who wrote The Tale of Genji.

Martine Bellen’s poetry has appeared in numerous anthologies. She won the American Academy of Poets Award and is a contributing editor of the literary journal Conjunctions. She also wrote the libretti for several operas.

The cat has a name
That I gave it.  Everyone knows the cat’s name
Is not its name. It is my name for the cat.
Sometimes the cat refuses to acknowledge
This name and sometimes the cat
Plays along with the life I’ve created for the cat.
Sometimes the cat pretends that it doesn’t live in a realm
Different from the one that the cat and I
Live in together. The cat has needs that must be met
For the cat to live in my house, though most of the cat’s time
Is spent elsewhere. I invite the cat to live with me
So I can perceive some of the “elsewhere”
In which the cat spends much cat time.
The cat shares what I can’t see by maintaining
An existence in my house and by responding to
The name I gave the cat.

I know there will be a moment
In the circuitry of space-time in which the cat will discard
The name and forsake my house for good
And will exist only in the fields
I cannot see without the cat living in my house. On that day,
I might say, “The cat has moved full time into the wild.”
Or I might say, “Miau-miau has run away.”

Reprinted by permission of the author and Spuyten Duyvil Press.
Copyright (c) 2015 by Martine Bellen. All rights reserved.