Jim Sterba
When European settlers came to America, they found the forests, plains, water and airways teeming with wildlife. It didn’t take all that long to wipe most of it almost entirely out. The passenger pigeon extinct. Beaver — almost extinct. The same with deer. 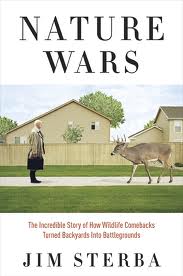 But there’s been a comeback of wildlife to urban and suburban areas, as fewer people hunted, natural predators were extirpated, and the forest grew back, especially in the northeast. Populations of deer, beavers and other animals are now growing and in some places becoming nuisances to the human inhabitants.

Journalist Jim Sterba says it’s a wildlife comeback miracle that’s turning into a mess, setting neighbor against neighbor in ferocious battles fought out in town councils and in the courts.

It’s not just that humans are expanding into wildlife territory–wildlife is coming into established neighborhoods, where, they’ve learned, the living is easy and the humans are tame.

But some people want to get tough. They want deer out of their gardens and off their roadways; geese off their golf courses; and beavers to stop flooding their properties.

Jim Sterba has been a foreign and national correspondent since the 1960s, working for the The New York Times and then The Wall Street Journal. He‘s covered wars in Asia, including Vietnam, Indonesia and Pakistan. In his latest book Nature Wars he turns his attention to the conflicts here at home over just how much wildlife are people willing to live with.

Poem: “Ornithography” by Billy Collins, read at Symphony Space in NYC in 2005

(The legendary Cang Jie was said to have invented writing after observing the tracks of birds.)

A light snow last night,
and now the earth falls open to a fresh page.

A high wind is breaking up the clouds.
Children wait for the yellow bus in a huddle,

and under the feeder, some birds
are busy writing short stories,

poems, and letters to their mothers.
A crow is working on an editorial.

That chickadee is etching a list,
and a robin walks back and forth

composing the opening to her autobiography.
All so prolific this morning,

these expressive little creatures,
and each with an alphabet of only two letters.

what just frightened them into flight —
a dog’s bark, a hawk overhead?

or had they simply finished
saying whatever it was they had to say?