Mohsin Hamid tells us about his fable of race and humanity, where white people suddenly turn brown. It’s called The Last White Man.

Then Omar El Akkad talks about his novel What Strange Paradise. It’s about what happens when a Syrian refugee, a young boy, washes up on a Greek island.

Writer’s Voice — in depth conversation with writers of all genres, on the air since 2004. Rate us on your favorite podcast app! It really helps others find our show. 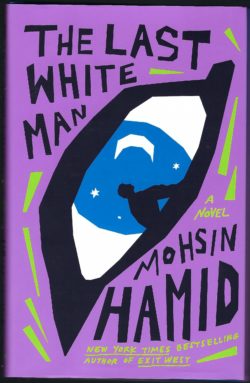 What would it be like if white people lost their whiteness—not just the privilege that comes with whiteness, but the skin color itself? How would they deal with a world where, all of a sudden, they woke up brown?

That’s the device at the heart of Mohsin Hamid’s novel The Last White Man. It’s a kind of fable that examines what happens when the social construction of race falls away to reveal our fundamental humanity.

Mohsin Hamid is the author of five novels, including Exit West and The Reluctant Fundamentalist.

Read an Excerpt from The Last White Man 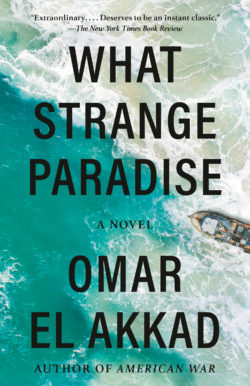 The world was shocked when two year old Alan Kurdi’s body washed up on a Turkish beach in 2015 after he and his family fled from Syria. Then, the world seemed to forget.
But the drownings continue—more than 3,200 died or went missing crossing the Mediterranean for Europe just in 2021.

Omar El Akkad’s new novel What Strange Paradise tells the story of a Syrian child migrant who is washed up on a Greek Island. The novel follows him as he revives and is then befriended by a local girl who hides him and tries to get him to a transit point where he can travel to safe harbor.

What Strange Paradise asks hard questions about how those who are privileged discount others and hide from our common humanity.

Omar El Akkad is a journalist and author of the bestselling novel, American War. He is an award-winning journalist and worked as a war correspondent reporting from Afghanistan, Guantanamo Bay and many other locations around the world.