We talk with Ben Sheehan about his book, What Does The Constitution Say? A Kids Guide To How Our Democracy Works.

Then we talk with constitutional scholar Noah Feldman about his terrific new history of Lincoln and the civil war from a constitutional perspective, The Broken Constitution: Lincoln, Slavery, and the Refounding of America.

Ben Sheehan
These days, the signs that the US Constitution is endangered are 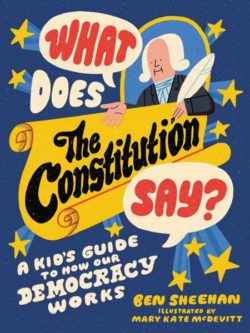 The checks and balances that keep the our three branches of government in equilibrium is being eroded by the ever-growing power of the executive and the judiciary. Meanwhile, civics seems to have largely been dropped from school curriculums.

Ben Sheehan’s book for kids, What Does The Constitution Say? is a welcome corrective to the lack of civic awareness in the US. Featuring fun facts and illustrations, the book is a clear and simple guide to understanding how our American government really works.

Ben Sheehan is a former executive producer at Funny Or Die. He’s spearheaded several efforts to boost voting and voting education.
Ben Sheehan is also the author of OMG WTF Does the Constitution Actually Say?

Fun quizz and study guide to What Does the Constitution Say?

Noah Feldman
The US Constitution, the document we all revere for its protection of rights, was founded on a terrible compromise —the protection of slavery in order to preserve the Union of states both slave and free.

But after the Civil War, the Constitution profoundly changed. It became an Emancipation Constitution with the addition of the 13th, 14th and 15th amendments.

How that happened is at the heart of Noah Feldman’s book, The Broken Constitution. It’s the first book to tell the story of how President Lincoln broke the Constitution in order to remake it. It offers a riveting narrative of his constitutional choices and how he made them.

Noah Feldman is the Felix Frankfurter Professor of Law at Harvard University, a contributing writer for the New York Times Magazine and a columnist for Bloomberg. His books include Scorpions: The Battles and Triumphs of FDR’s Great Justices and Divided By God: America’s Church-State Problem and What We Should Do About It. He’s also the host of the podcast Deep Background with Noah Feldman.

Read an Excerpt from The Broken Constitution