#ElectrifyEverything! We spend the hour talking with Saul Griffith about his new book, Electrify: An Optimist’s Playbook For Our Clean Energy Future.

It’s about how we can solve the climate crisis, live well and save money by electrifying everything—and powering that electricity with clean energy.

In maybe the 1980s or the 1990s when climate change just came to the attention of the general population, you could still imagine that we could get to the finish line with the transition via natural gas or biomass and biofuels. But we’ve left the carbon game so late, we need to get to fully decarbonized infrastructure in our next move…It’s now time that the fossil fuel machine in your life has to be replaced at its end of life with something that’s electric…to meet our climate targets of as close to one and a half degrees as we can get…We just need to make sure that every fossil fuel machine is the last version of itself.     — Saul Griffith

Like us on Facebook at Writers Voice Radio, on Instagram @WritersVoicePodcast or find us on twitter @WritersVoice.
Love Writer’s Voice? Please rate us on your podcast app. It really helps to get the word out about our show.

Time is running short. This week, UN secretary general, António Guterres, warned that “the world is on a catastrophic pathway to 2.7 degrees of heating”. That would almost certainly result in runaway global warming that would render our Earth uninhabitable. 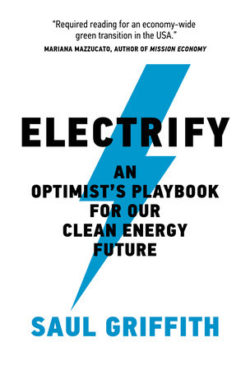 That horrific scenario is what scientist, engineer, entrepreneur and energy expert Saul Griffith is determined to forestall. He says our failure to fix climate change is just a failure of imagination. He says we have the tools to make the transition that will lead to vastly cheaper, cleaner energy with no loss in our standard of living.

Sound too good to be true? Griffith lays it all out in impressive detail in his book Electrify.

It’s a manual with a message: if we get the government policy right, every American household can make the transition to clean energy by the latter half of this decade. And it will save an average of $2500 per year per household.

But we need federal and state governments to step up to the plate to help everybody do it, no matter their income. Biden’s Build Back Better infrastructure plan would be a down payment on making that happen.

Saul Griffith is advising the White House on energy policy. He says we need to pass, at the minimum, the climate provisions of the two infrastructure bills now in Congress. Waiting will cost us not only billions, not only lives, but our futures, as well.

Saul Griffith is the co-founder of Rewiring America, which is working to launch a movement that electrifies everything. He is also the founder and chief scientist at Other Lab.

Read an excerpt from Electrify