We talk with Elizabeth Hinton about her book, America on Fire: The Untold History Of Police Violence And Black Rebellion Since The 1960’s.

Like us on Facebook at Writers Voice Radio or find us on twitter @WritersVoice. Love Writer’s Voice? Please rate us on your podcast app. It really helps to get the word out about our show.

Elizabeth Hinton
The Black Lives Matter movement that erupted in 2014 when first Eric Garner and then Michael Brown were murdered by police is not the first time Black communities in America went out in the streets to protest police violence. 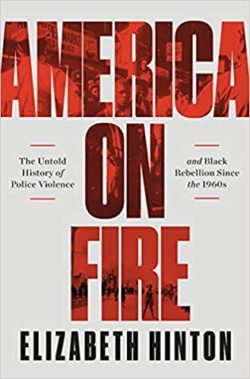 In her brilliant book, America on Fire, historian Elizabeth Hinton takes the reader on a journey from Detroit in 1967 and Miami in 1980 to Los Angeles in 1992 and beyond to chart the persistence of structural racism and one of its primary consequences: what the White power structure called “riots” but what Black people call “rebellions.”

The central lesson from these eruptions—that police violence invariably leads to community violence—continues to escape policymakers, who respond by further criminalizing entire groups instead of addressing the underlying causes. The results are the hugely expanded policing and prison regimes that shape the lives of so many Americans today.

America on Fire is a powerful call to end structural racism and finally realize the American promise of full equality for all.

Elizabeth Hinton is Associate Professor of History and African American Studies at Yale University and Professor of Law at Yale Law School.

Next week on Writer’s Voice, we talk with wildlife biologist Catherine Raven about her memoir Fox and I: An Uncommon Friendship. We also learn everything about recycling from Jenny Romer; her book is Can I Recycle This?