We spend the hour talking with Hugh Raffles about his new book, The Book Of Unconformities: Speculations On Lost Time. It’s part natural history, part memoir, part meditation on the relationships between people and rocks throughout time.

Then, at the end, a short story about the Cure Hunter from Francesca’s book Province of the Heart. 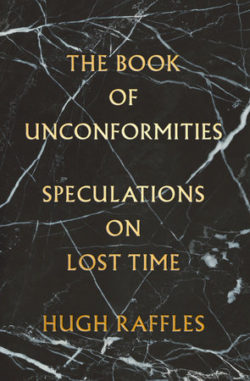 When Hugh Raffles’ two sisters died suddenly within a few weeks of each other, he reached for rocks, stones, and other seemingly solid objects as anchors in a world unmoored, as ways to make sense of these events through stories far larger than his own.

The book that emerged is The Book of Unconformities: Speculations On Lost Time. It’s a profound and affirming meditation, grounded in stories of stones: Neolithic stone circles, Icelandic lava, petrified whale blubber in Svalbard, the marble prized by Manhattan’s Lenape Indians, and a huge Greenlandic meteorite that arrived with six Inuit adventurers in New York City in 1897.

Hugh Raffles is the author of the acclaimed book Insectopedia and of In Amazonia: A Natural History.

Read An Excerpt from The Book of Unconformities